I thought I would finally give the new recipe Lucozade a go, following its battering from social media.

I went to Tesco to buy some, but it wasn’t clear that what was on the shelves was the new formula Lucozade or not, because it said ‘Original’ on the bottle. Was this old stock of the real Original, or were Lucozade pretending that nothing had changed? A look at the ingredients confirmed a lot of artificial sweeteners in it, so this had to be the new recipe. So a black mark straight away for the new owners, Suntory. If you fundamentally change the formula, be honest enough to say so. If less sugar is so great, then why not advertise it on that basis?

It got worse, even in the shop. I had asked some people who were also looking at the Lucozade shelf if they knew whether this was the new formula which had less sugar, and they said (incorrectly, as it turned out), ‘Oh no, the new one is that one,’ pointing to a bottle called Lucozade Zero. So people are getting the idea that the bad publicity about the new taste of Lucozade is only about the no-sugar version, a misaprehension that Suntory seem to be in no rush to correct. 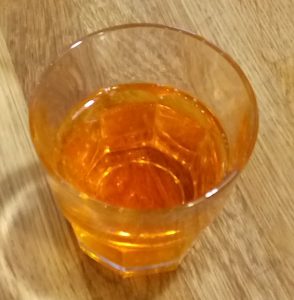 Anyway, at home I gave it a go. To start with I was… well, I wouldn’t say pleasantly surprised, but it wasn’t as bad as I was expecting. I’d been primed by the likes of Delingpole to expect something that tasted like it came out of the anus of a diseased baboon, but the taste was definitely in the range of normal soft drink taste.

But the more I drank, the less I enjoyed it. After half a glass I didn’t want any more. There was something unpleasant about it. Lucozade has always been a slightly weird taste, but this was just wrong. So that’s the end of Lucozade for me.

And here’s the thing. Even if they fix it, like Fanta managed to eventually fix Diet Fanta, what would be the point of drinking Lucozade any more? I only drink it when I’m poorly, or when I’m exhasuted from lack of sleep and have something I have to do despite that. Taking so much sugar out means it’s no good for that purpose any more. And I’m as sure as hell not going to drink it for pleasure. So unless it can be used for boot-cleaning, that’s Lucozade done with for me. Another simple pleasure in life ruined by SJWs. Fuck you SJWs. Fuck you all.