In times gone past I could have easily condemned the Poundland tweets for being unnecessarily crude and not family-friendly. But after years of humourless leftist hectoring and soft Stop Funding Hate-style fascism all we can do is applaud them. Well played sirs, well played. You’ve made the SJWs look like idiots, while getting them to give you oodles of free publicity. 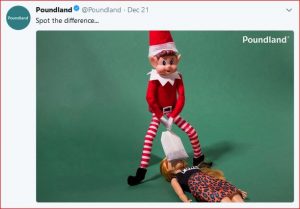 I notice the SJWs aren’t declaring that they’ll never shop in Poundland again. Most of them wouldn’t be seen dead in such a place anyway, so there’s no point them declaring a boycott. Can’t see Poundland’s regular customers paying any attention to some bearded hipster declarations on Twitter.

I was in a Poundland myself last week. It’s not the greatest shop. Most of the stuff there is barely worth a pound. But occasionally you get some bargains. Bought a bread knife for a pound last year that’s still going strong a year later. it’s not a knife I use all the time, I’ve got a few, but it’s still impressive for a pound. I’ll definitely be back in in the New Year. It may not be a shop where the clientele dazzle me, but at least I don’t have to look at any SJWs.