I’ve always liked Brendan Fraser, despite George of the Jungle. I still like him. I sympathise with him having a depressive period. But all I can think is that he’s a snowflake.

On Fraser’s way out of the hotel, he was hailed by Philip Berk, a former president of the HFPA [Hollywood Foreign Press Association]. In the midst of a crowded room, Berk reached out to shake Fraser’s hand. Much of what happened next Berk recounted in his memoir and was also reported by Sharon Waxman in The New York Times: He pinched Fraser’s ass—in jest, according to Berk. But Fraser says what Berk did was more than a pinch: “His left hand reaches around, grabs my ass cheek, and one of his fingers touches me in the taint. And he starts moving it around.” Fraser says that in this moment he was overcome with panic and fear.

Fraser eventually was able, he says, to remove Berk’s hand. “I felt ill. I felt like a little kid. I felt like there was a ball in my throat. I thought I was going to cry.” He rushed out of the room, outside, past a police officer he couldn’t quite bring himself to confess to, and then home, where he told his then wife, Afton, what had happened. “I felt like someone had thrown invisible paint on me,” he says now. (In an e-mail, Berk, who is still an HFPA member, disputed Fraser’s account: “Mr. Fraser’s version is a total fabrication.”) …

Fraser says, “I became depressed.” He started telling himself he deserved what had happened to him. “I was blaming myself and I was miserable—because I was saying, ‘This is nothing; this guy reached around and he copped a feel.’ That summer wore on—and I can’t remember what I went on to work on next.” 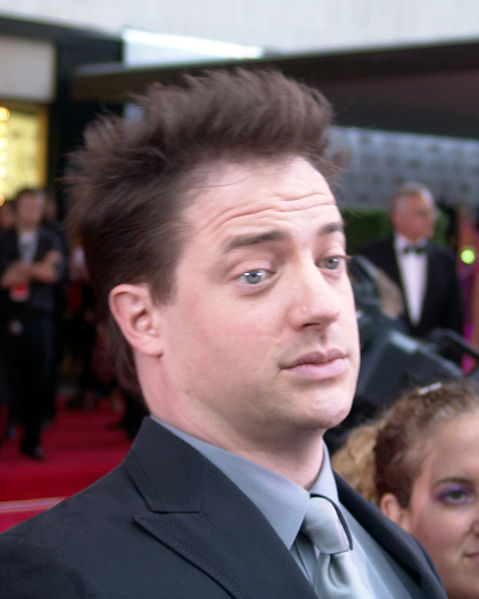 The exact moment when Brendan Fraser was goosed by Philip Berk.

Suppose we assume he’s telling the truth. An unpleasant experience, sure. No-one would  blame him for being pissed off. You’d expect him to be pissed off. But surely any normal person would say ‘Fuck off’ and shove the little gropey turd away. Maybe punch him in the face while saying, ‘Little prick tried to cop a feel. Well, cop that you sleazy perv’. Or even just saying, ‘That is not fucking funny, Philip, thank you very much. I think you’ve had enough to drink.’

What a normal person wouldn’t do is slink away in shame like a sad and scared Women’s Studies student who’s accidentally stumbled into the rugby club and is being scarred for life right at that very moment because the rugger buggers are singing a bawdy song and clinking their beer glasses rather loudly, so loudly that not only is she getting a migraine, but so is her whole class because of sympathetic resonance or women’s intution or something to do with period synchronization.

And when that person is a major Hollywood star you really wouldn’t expect such a pathetic response, especially when the stool finger is a minor journalist, and not some all-powerful producer. Maybe it’s to Fraser’s credit that he didn’t just have Berk taken outside and beaten up there and then. (Peter O’Toole had Kenneth Tynan beaten up once because he didn’t care for one of Tynan’s practical jokes, and Tynan never squealed at the time. Then again, Tynan was a masochist.) Hollywood stars have always been insecure egotists who can work themselves up into a state over nothing, but I can’t really see any of the old guys going home and throwing himself weeping onto his pillow because a hack tried to feel his bumhole at a party.

I expect it was partly because — from the sounds of it — Fraser was already sliding into depression, but this sort of gross over-reaction and the adoption of victim mentality over so little reflects badly on Hollywood. It’s also what helped fuel the bad behaviour of all the Weinstein types. A few old-fashioned punches and some forthright talk at the time might have helped put a stop to this sort of behaviour.

(But at least he isn’t going around getting involved in screaming matches in bookshops.)