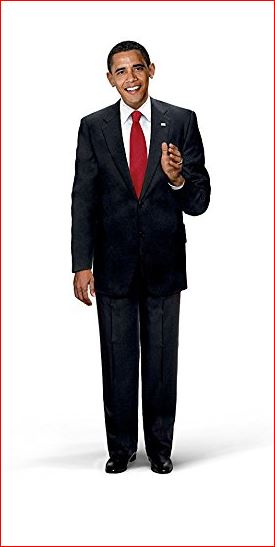 Honor our history-making 44th President and the leader of the free world with this commemorative President Obama doll that speaks in the President’s own voice, available only from The Ashton-Drake Galleries.

Expertly handcrafted in artist’s resin to create a striking likeness of Barack Obama, this talking doll wears a custom black suit inspired by the President’s attire, with a flag pin on his lapel and a white shirt with a red tie underneath
This doll is not a toy, but a fine collectible to be enjoyed by adult collectors.

For $129 bucks I’d expect him to do something, like close down a kid’s lemonade stand, or steal your credit cards and run up huge bills on the phone in the name of ‘building our future’. But all he does is talk. I suppose in a way that’s realistic.

He talks! At the push of a button, hear the President’s own voice speaking unforgettable phrases like “We will continue our journey forward,” “We are an American family and we rise or fall together as one nation and as one people,” and “God bless you. God bless these United States” and many more.

Yes, unforgettable phrases like ‘We will continue our journey forwards’. Just in case you thought the journey was going to go backwards. Even your Dad had more inspiring words when you went on a journey to the beach house and all the kids wondered whether they were ever going to get there. Perhaps the doll should say ‘Not far to go now, I can see the ocean’.

If you’re going to use the more boring and vacuous of Obama’s platitudes there’s a lot to choose from, but it would have made sense to have gone for one of the famous and ludicrous ones that the left used to swoon over, like “I am absolutely certain that generations from now, we will be able to look back and tell our children that this was the moment when we began to provide care for the sick and good jobs to the jobless; this was the moment when the rise of the oceans began to slow and our planet began to heal”.

Although personally I’d like an Obama doll that says ‘You didn’t build that’. That would be good to have on hand under the table when the boss takes credit for your idea:

Expertly handcrafted in artist’s resin to create a striking likeness of Barack Obama, this talking doll wears a custom black suit inspired by the President’s attire, with a flag pin on his lapel and a white shirt with a red tie underneath
This doll is not a toy, but a fine collectible to be enjoyed by adult collectors.

The real ACTUAL doll ITSELF looks more like a chocolate version of President Bush with botox & cheek implants
No I did not yet make a purchase this is more informative as I did do some scoping out!
For inquiring minds the answer is NO!
This is not an actual image of the DOLL it is indeed a PICTURE of the real President OBAMA!!!
My jaw dropped when I first saw this “living” doll!
I have collected them so from the standpoint of a collector I had NEVER seen such an actual likeness in ANY doll before!
The shock & awe lasted all of about 5 minutes and until I Googled THE TRUTH!

The real ACTUAL doll ITSELF looks more like a chocolate version of President Bush with botox & cheek implants! ..HA! hows that for irony!!!

This Obama doll is even better, he talks when you press his legs together. 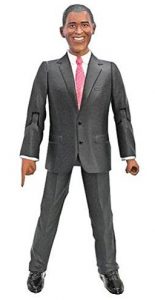 And one of the three things he says is from the Declaration of Independence. They couldn’t even find three things that he (or his speechwriters) wrote that were worth using. Which is not surprising when you read the other two: “My fellow Americans we are made for this moment and we will seize it, so long as we seize it together”, and “With common effort and common purpose, with passion and dedication, let us answer the call of history and carry into an uncertain future that precious light of freedom zzzzzzzzzzz.” Not exactly Buzz Lightyear, is he?

And there’s even a Hillary Clinton nutcracker which doesn’t look much like her, but it does crack nuts with its legs. But I’m going to force myself to stop here.