Amelia Gentleman, the Guardian journalist who helped expose the Windrush affair,  has to be a parody. Remember that there are two types of Guardian journalists. There are the posho lefties with their double firsts from Oxbridge, straddling the aristo-intellectual-arty farty worlds. And then there are the nasty little unhinged activist lefties like Owen Jones. 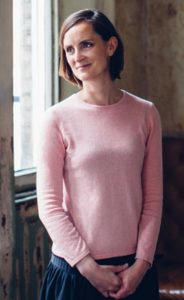 Amelia Gentleman is a paradigm example of the first. In fact, she’s so paradigm that she may even be the Platonic form for the type. She looks exactly how you’d expect this type to look. She comes from artistic stock (father an artist, his parents both artists.) She went to St Paul’s School. She’s married to Jo Johnson, a fellow posho. And not only did she go to Oxford, she went to Wadham, where all the best female posho lefties go (although Wikipedia says it was Balliol, also another lefty politician/journo stronghold).

And they’ve now put up a large photo of her in Wadham’s C. Day Lewis room, simply because (in their own words), there weren’t enough pictures of women up there. And a Guardian journalist was the best they could manage.

I expect she’s frightfully decent, although somewhat boring, in person. The best you can say about this sort of Guardianista is that they’re not as bad as the paper’s loony left columnists. And it’s nice that they can tolerate a Tory enough to marry one, rather than screaming and crying and running to The Guardian’s safe room if one comes within fifty metres of them.

Update: I’m wondering how this fits in with Tory politics. Jo Johnson was one of George Osborne’s team (they go back to Oxford, Johnson was one of Osborne’s team when Osborne edited Isis). But it’s unlikely to be part of Osborne’s grudge against May, because Rudd was one of Osborne’s buddies as well. So perhaps it is just a matter of Gentleman’s own interest in the case. She is a Guardian writer, after all, and as much an anti-deportation activist as a journalist — her Twitter feed is all about Windrush. (Unsurprisingly she seems to have no interest at all in investigating the government’s failure in deporting a multitude of illegal immigrants.)

I also note that Jo Johnson came to Rudd’s defence yesterday. Perhaps a case of saying sorry for what the wife was doing to her? (Worth watching just to see Jo Johnson in action, although ‘action’ is perhaps not the right word here. I expect he’ll have heard this a million times, but you have to say that Boris definitely got all the charisma in that family. It was textbook deflect-and-bore tactics, but who wants to die with that on their headstone?)