↓
Home→Politics→Don’t give leftists their bully pulpits

One of the reasons the left is currently spawning at a great rate is because because of all the platforms they’ve been given over the past few decades, allowing them to constantly preach their message.

Now, it’s obvious to anyone with a brain that the progressive left is the modern equivalent of religion. And a religion spreads when that religion has its own professional class, who have the time and money to enable them to spread the word. And especially when that religion has numerous pulpits available to them. So this teaches us something. If the right ever wrests power away from the left, it must make sure that this is not allowed to happen again. 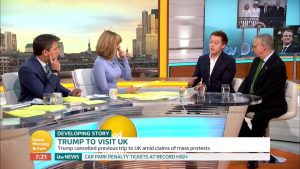 A nasty little leftist is treated as though he’s an oracle, rather than the toenail infection he really is.

Not that we can stop rich people funding their own pulpits, it’s a free country (or at least it used to be, and hopefully it will be again one day), but we can make damn well sure that the left don’t get to divert taxpayer’s money into funding their pulpits for them. The BBC, Channel 4, the advertising money given to The Guardian, all of those platforms must go. And all the public money that goes into the left’s professional class must be taken away from them, as well as the prestige they get from their powerful positions in Universities, quangos, the civil service, etc., which they also use a pulpit.

If they have to scramble to work for a living, like the rest of us, then that makes it harder for them to harangue us.

(This is not denying anyone their right to free speech, leftists will still have numerous opportunities to say their piece, it will just prevent them from being able to broadcast non-stop and to pose as the official voice of the country.

And if not getting your own TV show is being denied your right of free speech then I demand my own BBC show now.)