I don’t think it’s well-known that the Germans could have crushed the Russian Bolshevik government in its early days, but chose not to. The Bolsheviks had a tentative grip on power, and Russia was in chaos. The Germans debated whether to go in to Moscow and St. Petersburg and remove Lenin and his cronies. In the end the Kaiser made a sudden decision to help the Bolsheviks, not remove them. 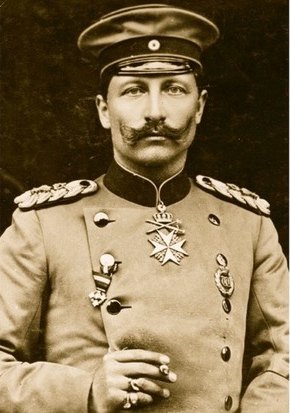 For those who believe that some days are more “historic” than others, June 28, 1918, should loom as one of the most historic of modern times, for it was on that day that the Kaiser, with one impulsive decision, saved the Bolshevik regime from the sentence of death which it was in his power to pass (Richard Pipes, The Russian Revolution 1899-1919, Fontana: 1990, p. 633).

The reason was that the Bolsheviks were ruining Russia, which would make her less of an potential threat in the future, and the Germans would be able to make a fortune trading with her over the years as she got more and more desperate and had to sell off her abundant natural resources for a song. And the Germans would be able to take more and more land — they’d already taken over the Ukraine (although this was not to last once they surrendered to the Allies a few months later). Plus Lenin no longer wanted to fight the Germans at that point, whereas most other Russian politicans, even most of the other Bolsheviks, did.

But it doesn’t pay to underestimate Bolsheviks, or give them a free pass. It’s true that they were ruining their country, but that doesn’t mean that were going to leave Russia weak, and a non-threat to their neighbours. Having ruthless fanatics with a vast population at their disposal next door turned out not to be such a great idea.

Of course, the Germans never imagined that the Bolsheviks would stay in power for so long. A few years at most is what they thought. Again, don’t underestimate the tenacity and staying power of fanatical leftists. It’s notable that almost all the German embassy staff on the ground in Russia were firmly of the belief that the Bolsheviks were dangerous extremists who the Germans should be fighting against, not palling up to.

I’ve been saying recently that perhaps conservative and libertarian voters need to abandon the Tory party in order for it to be destroyed, or re-born. But perhaps letting the Cobynistas into power, when we already have an establishment that is mostly on their side, is too horrendous an idea to contemplate. It’s assumed that they’d soon be out on the arse once the public saw how they operate. But that’s what the Germans thought about the Russian Bolshies. And the public did see how the Bolshies operated, and a great many of them didn’t like it. But it took over seven decades and tens of millions of deaths before they were able to get rid of them. Perhaps the lesson is to never give ruthless Commies access to power.

One thought on “What a mistake-a to make-a”