So the writer and critic of feminism Peter Lloyd posted a Tweet in which he made reference to this story where twenty women invaded a men-only pool in Hampstead dressed as men. They were protesting about the proposed legislation that would allow anyone to go to a gender-segregated pool if they merely ‘identified’ as that gender. (Lloyd possibly got the wrong end of the stick about this story; it’s hard to tell from his brief tweet.)

Then every angry stereotyped tattooed feminist clown in the country piled on with comments, and likes for the comments. (Because I left my own comment I got notified of dozens of these likes; it was like a women’s studies conference straight out of central casting.) And these weren’t even the really dumb feminists, because most of them could at least see that gender self-identification was a stupid idea. Although one of them was so dumb that she actually had this virtual-contradiction in her Twitter bio:

Supporting equality with protected female only spaces. Gender is a social Construct. 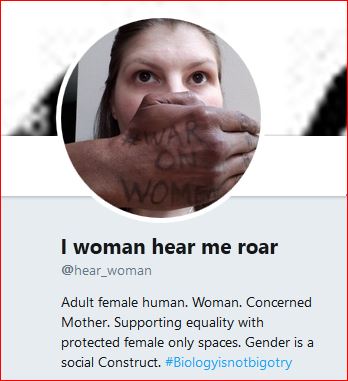 And one particularly idiotic woman said:

Because Mongos like you don’t give a shit otherwise. Men d.g.a.f untill it happens to THEM or their sacred spaces. Did you know about gender self I’d issues before this mra *Man* tweeted about it (and didn’t read his own link, div.)??

Yes, this outraged bag of cliches actually though that men like Peter Lloyd had no idea about ‘gender self issues’ before these brave feminists had brought the issue into the Twattersphere. They had no clue whatsoever that conservative men (and women, for that matter) had been going on about it constantly for the last few years. From which we can conclude that the loony radfems really do live in their own little bubble, with no idea of what anyone outside it really thinks.
Social media