Here’s is a fair question: Why aren’t the natives in the UK voting for anti-immigrant parties like they are in Europe?

One might be tempted to answer that it’s because the Brits are much more tolerant of foreigners, and less anti-immigration than the mainland Europeans. Left-wingers might add that the UK public has grown sick of the likes of Herr Farage and rabble-rousers, and the racist old gammons are dying out, and we’re becoming a true and wonderful multi-cultural society.

But that’s not really true, is it? There might be some truth in it, but not much. Everyone will or should have seen by now the two large polls done this year, one by YouGov, and one by Eurobarometer, where the two biggest concerns in most European countries, including the UK, were immigration and terrorism, ie. Islam. 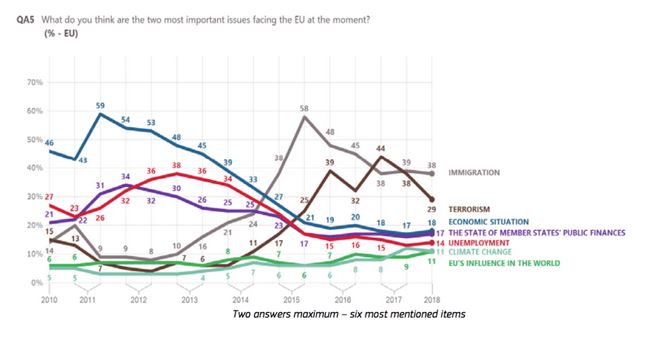 One real reason for why the move to anti-immigration parties hasn’t started yet is Brexit. The public are waiting to see what Brexit brings in terms of immigrant controls. They’re hopeful (whether naively or not)  that Brexit will allow Britain to reduce immigration.

And that’s why the public will not put up with delaying Brexit. The politicians and the civil servants think they can just string Brexit out for years and years, thinking that means the crack-down on immigration will never happen, but if they do that then the public really will start moving to anti-immigration parties, and will abandon the mainstream parties. The lid cannot be kept on the immigration issue for too much longer. Brexit has to happen, immigration controls need to happen, or the Establishment will find itself in the dole office with Tommy Robinson as PM.