So now we know the answer to the question that’s been haunting us for years: do we stick with the Conservative Party because they’re (supposedly) the only party with any chance of keeping Corbyn out, and hope that they’ll eventually move away from the left, or do we give up on them, and vote for another, minor, right-wing party, like UKIP or For Britain?

And the answer is… dump the Tories. In the past week they have shown that they are irredeemable. Their leader, Theresa May, has engaged in the most disgraceful operations against the people since, well, since Ted Heath deceived us over the EEC. But it’s more than that. Even if they get rid of May and replace her with a Leaver like Boris Johnson, or even better, Jacob Rees-Mogg, the fundamental problems with the Tories remain. 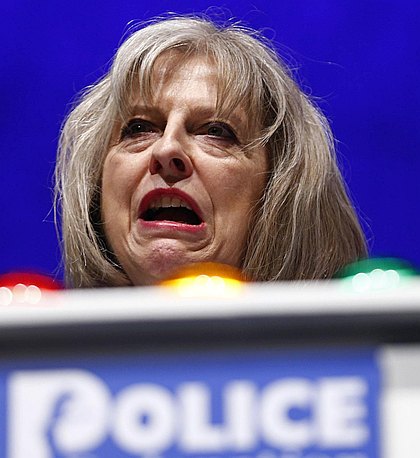 In a parallel universe the traitor’s head is removed by the police and displayed to the public.

For one thing, I’d say around half the MPs are wet Remainers. And while so far most of them haven’t dared to vote against Brexit, give them half a chance and they will. In fact, give them half a chance and they’d vote for all sorts of wet rubbish. Most of them aren’t conservative, or libertarian, and they don’t represent the right. So why put up with them as our representatives in Parliament any more?

And they’re not going away anytime soon, no matter who leads the party. Just installing Rees-Mogg as leader isn’t going to make much difference there. Maybe Soubry will leave the party. Maybe Wollaston will refuse to serve in the Cabinet. But mostly we’ll have the same MPs as before. And the party will be just as divided, ineffective and untrustworthy as before.

The other thing is that Brexit isn’t the only political issue of major importance right now. The country is being forcibly sent down an extreme politically correct path, and this is being enabled by the Conservative Party and its MPs. They’ve been in power for seven years now, and the SJWs run the country more than ever. The police openly  harrass common-sense opinion, Islam has become a protected religion, and free speech is under threat. There’ll only be more and more of this under the Conservatives. Even with Rees-Mogg as leader, the Conservatives won’t have the willpower or the inclination to change things. In the words of that great modern cliche, the Conservatives are part of the problem, not part of the solution.

The only hope is to start installing real right-wingers into Parliament (and the councils), and that means no longer voting Conservative. Maybe if you’re in Rees-Mogg’s ward, or Steve Baker’s, you should continue to vote for them. But in general you should consider the Tories to be a party of the left, and disdain them. We have to decide on exactly which party we’re going to go for now – that’s a whole other issue – but it isn’t going to be the Cons.

Dump Blue Labour. And tell the pollsters if they call.