The independent right – I call it that to distinguish it from both the establishment right, and the alt-right (because ‘alt-right’ has become a useless term) – is in disarray once again. For the last year or so many of them have been going on about how the left has been succeeding because lots of left-wingers are using Saul Alinsky’s Rules For Radicals as their guidebook, and how right-wingers need to do the same.

The one rule the indy-right really emphasised was this one: ‘Make the enemy live up to its own book of rules.’ We need to do this too, they said, and really hammer the left hard on it.

So: what’s one of the things the left has been doing recently? Getting conservatives fired for unwise tweets in their younger life, that’s one important thing they’ve been doing. Remember Toby Young? A few crude tweets from years ago, and the guy was hounded out of his new job. It was obvious that he was targetted not because of a few bad jokes he’d made in his days as a laddish attention-seeking journalist, but because he was a right-winger who’d been put into an influential position. It was a political assassination.

So if the right really was going to ‘make the enemy live by its own rules’, then it stands to reason that the thing to do would be to throw this sort of thing back in the left’s face: find some offensive tweets by influential leftists and get them fired. See how they like it. And that’s exactly what Mike Cernovich did to James Gunn, the Guardians of the Galaxy director and prominent anti-Trump crusader who had loudly cheered on Rosanne Barr’s firing:

I wish some of these so-called defenders of liberty would start to understand what freedom of speech is AND isn’t. Roseanne is allowed to say whatever she wants. It doesn’t mean ABCNetwork needs to continue funding her TV show if her words are considered abhorrent [tweet since deleted].

You have to say that after this tweet Gunn was pretty much asking for someone to go through his own Twitter account to see if what he’d said in the past also fell foul of the new rules. And unfortunately for James it turned out that he used to have a bad habit of making creepy paedophile jokes, and Cernovich made these public, and made sure his employers, Disney, were well aware of them, and so they fired him.

So what did the indie-right do when this happened? En masse (especially in the UK) they said how terrible it was that Gunn had been fired. Deplored the whole thing. Defended his jokes, despite saying only last week how Hollywood was full of paedos and how it had to stop. “But he made a funny movie we like, you can’t sack him.” Basically handed their sorry arses to the left on a plate.

The left, of course, howled, and said how despicable it was that the ‘alt-right’ did this. Claimed he’d only been sacked to please the alt-right. Gunn’s cast members all said he should be re-hired. There was no mention of the fact that Gunn and his mates do this sort of thing to their enemies all the time. None of them said ‘Give Rosanne Barr her job back too’. Only James Gunn was to to be given mercy. She’s KKK, whereas he’s just a harmless jokester. So the left are playing their usual hardball game, gaze firmly fixed on the longer picture, while the right take their eye off the target because, like, well, Rocky Raccoon (or is it Bucky Beaver?) is so cute and funny. 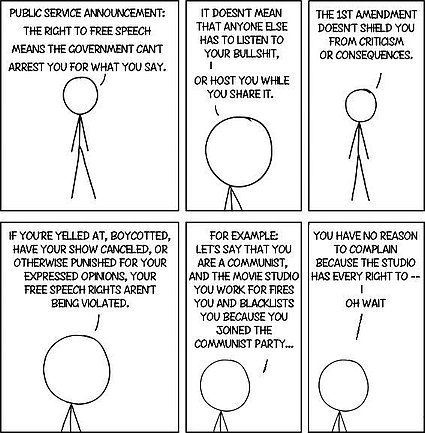 A useful edit someone did on that hypocritical XKCD comic that the left always shares on Twitter whenever they get a right-winger fired.

I’m not saying that making the left play by their own rules is definitely the right thing to do. I was always uncertain about it, partly because I worried that the right would wimp out when push came to shove. And I don’t like people being sacked because they used to tell sick jokes either. But if you’re going to go around playing the tough guy, saying ‘Let’s beat them at their own game so they have to abandon their new rules’, you’d better have the backbone to stick to it. But what happened was that the guy at the front of their pack threw a punch, and then all the other tough-talking right-wingers ran away, because they it turns out they don’t like street-fighting after all.

Or almost all of them. One tough-talker who hasn’t run away is Kurt Schlichter, one of the main proponents of the idea that we should play the left at their own game. Whether or not you agree with him on his ‘throw-Alinsky-back-at-them’ schtick, you’ve got to admire him for sticking to his guns, and not backing down over James Gunn:

Oops. He just had his pointy head stuck on a figurative pike and I just don’t care.

Not even a little. Not anymore.

Cultural war is hell, and I propose it be hell first and foremost on the liberals who started it …

The New Rules are stupid, but they are the rules, and the only way the Old Rules can come back is if everyone agrees to them. And that requires we deal the pain.

So here’s a suggestion for the right. When you’re telling everyone how we need to act in future, go through some plausible hypothetical scenarios, and think carefully about what you’d do in those situations. I mean, what you’d really do given the way that most other people are likely to react. If what you’re really likely to do is the total opposite of what you’re saying we should do – if you’re not Kurt Schlichter – then maybe you need to rethink your proposals.