It’s hard to believe that a lot of Brexiteers, and Remainers as well, who have previously been critical of May, have been singing her praises since she made her speech. The speech was pure theatre. May puts on these little shows occasionally where she pretends to be tough and Thatcherite, and then goes out into the real world and is hopeless. She’s not defending Britain. She’s defending her useless Chequers plan, which nobody in the whole Universe except her team like. Not that she’s even really defending that, because she’ll gladly water a lot of that down over the next few months.

Yesterday Donald Tusk said our proposals would undermine the single market. He didn’t explain how in any detail or make any counter-proposal. So we are at an impasse.

She’s known for months that the EU wasn’t interested in Chequers. She knows exactly why they aren’t. And they have offered another proposal, as she says herself in the same speech. A free-trade agreement along the lines of the Canada-EU agreement is on the cards. If she wants a deal than that’s the framework. That would make most Britons happy. Sure there is the Irish border problem associated with that, but that’s what needs to be negotiated. If that can’t be solved then a hard, ie. a clean Brexit must happen, but few people really believe that the EU are that worried about the Irish border. 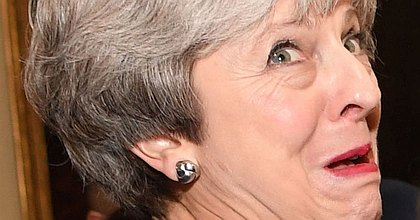 But I have also been clear that the best outcome is for the UK to leave with a deal.

In other words, “I’m terrified of the prospect of a no deal Brexit”. The EU knows this, so they know she’ll back down eventually. She knows, and they know, that a no-deal Brexit requires her to have exactly the sort of guts and belief that she clearly doesn’t have.

What’s hard to decide at this stage is whether the EU would like May to stay on because they think she’ll give in and bring about a very soft Brexit, giving them control over Britain, or whether they genuinely want rid of Britain, and would prefer to undermine May so that they can get a Brexiteer PM in and sort out a free trade agreement and be done with the whole thing. I was previously leaning towards the former theory, but after the Salzburg fiasco, and they way the EU treated May, I’m starting to lean towards the latter.

Anyway, the Tory party now has the perfect chance to boot May out. Although her little am-dram performance may have saved her neck once again.