↓
Home→Brexit→A sorry would be nice

So apparently there are all these Remainers who are now Brexiteers after they saw how the EU treated Theresa May. In reality the EU leaders are just taking her for an idiot like everyone in Britain has been doing, but this isn’t really the done thing in international diplomatic circles, and many British people are now feeling that somehow the country has been insulted, and, hang on, maybe these EU chappies aren’t great and wise statesman after all, but third-rate little autocrats in a chummy private club, which would explain why they were all dressed in appalling shiny blue suits like footballers off to a wedding. 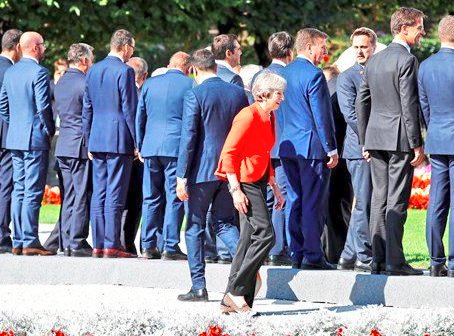 So I suppose it’s a good thing that this  has happened, and I should welcome these converts to our corner. But I still can’t help feeling pissed off with these idiots. Because the correct response isn’t really this:

Crikey, the EU isn’t so nice after all, perhaps we really should leave

Crikey, the EU isn’t so nice after all, and I now see that I was horrendously wrong to have spent the last two years running around screaming about evil Brexiteers. In fact, I’m now doubting that I have much political judgement at all, or any real knowledge of the actual world apart from where the nearest Harvester is, and my knowledge of human nature has been exposed as rudimentary and child-like. I realise now that I knew absolutely bugger-all about the EU and had no business acting like I did. You know what, I should shut my mouth for ten years about anything vaguely political, and acknowledge that even Jacob Rees-Mogg, who I thought was an amusing comic turn at best, is more qualified to run than country than me. And I should tell all my progressive friends, who are still mad-keen Remainers, that they are deluded know-nothings who are closer to fascism than any of the people they criticise day in and day out.”