The latest thing leftists are doing is taking psychological theories they half-understand and using them to “totally own” Toryboys. Take a look this lame attempt from a couple of days ago in the New Statesmen (which does seem to be as pathetic as when you last looked at it in the early 90s):

There’s a concept in psychology with the slightly confusing name of Theory of Mind which means, basically, the ability to recognise other people’s perspectives: to imagine the world as other people would see it.

Children generally develop Theory of Mind after they’ve developed the ability to communicate … It’s only around age four or five that children develop a functioning Theory of Mind, and begin to consider others’ thoughts and feelings and how the world might appear to them. Until that point, they will not instinctively understand that other people have beliefs, desires, emotions or experiences that are different to their own.

Basically this is yet another in a long line of hundreds of thousands of New Statsman articles which robotically denounce heartless Tories, only this time, to provide a slight variation on the theme, and to add a slight – a very slight – bit of humour, the author crudely shoehorns in a little bit of learning, to show that he isn’t the usual robotic lefty moron, but is a man of letters as well as a caring leftist hero. The actual effect was just a lot of loud clunking sounds.

The other thing that amused me was the author’s portrait: 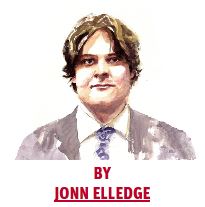 Normally leftists, especially female ones, make sure that their portraits make them seem good-looking, intelligent, and nice, even when they aren’t like that in real life. But this guy’s happy to go with a drawing which makes him look like your typical sour and self-righteous leftist, and a bit dim. And a bit dim is what seems to be:

Guido, incidentally, has a long history of describing left-wing ideas as “evil”.

That’s because, as long history has shown us, they are.