Recently I blogged about the bungled attempted assassination of Trotsky that took place in Mexico in 1940, a few months before the successful one happened. It was both incompetent and nasty, so much so that it would make a good comedy along the lines of The Death of Stalin. There’s a lot more to this tale that deserves to be better known.

As I said in my earlier post, a Mexican painter — yes, a painter — called David Alfaro Siqueiros was assigned by the NKVD to kill Trotsky a few months before Ramon Mercador’s successful attempt, and he totally botched it. He and his men swept the bedrooms with machine-gun fire, but still managing to miss. They had, however, killed the sentry on duty, an American called Harte. Harte’s body was later found buried in Siqueiros’ villa, and he was arrested. There was no doubt that question that Siqueiros was the guilty party, and no-one pretended otherwise. 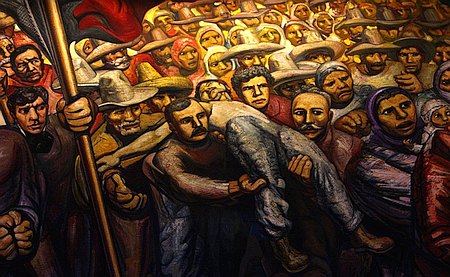 One of Siqueiros’ stupid Commie paintings.

The Mexican establishment, however, was full of Commies, and Commie sympathisers, and they put great pressure on the courts to go very easy on Siqueiros:

“Intellectuals and artists” urged the President to take into account the fact that “artists and men of science are considered the bulwark of culture and progress”.

As a result, the court accepted Siqueiros’ plea that the firing of 300 bullets into the bedrooms had been for “psychological purposes only,” without any intention of killing or hurting anyone. Evidence that when Siqueiros heard of Trotsky’s survival he had exclaimed, “All that work was in vain!” was disregarded. The facts about Harte’s death were found not to constitute a prima facie case of murder. The judge claimed that the accused did not form a “criminal conspiracy,” since a conspiracy could not be made for a single temporary job but must have “stability and permanence.” They were even acquitted of impersonating police officers, on the grounds that though they had dressed up in uniforms, they had not attempted to usurp any police functions. ( Robert Conquest, The Great Terror: A Reassessment, p. 417.)

This all sounds rather familiar to modern ears, doesn’t it? And as if all that wasn’t bad enough, Siqueiros was allowed to abscond before sentencing:

While Siqueiros was still out on bail, a convenient invitation to paint some murals in Chile, at the instance of the Chilean Communist poet Pablo Neruda, led to his decamping thither. So even the light sentence he might have got for the crime still attributed to him — stealing the two automobiles outside the Trotsky house — was avoided. (Conquest, p. 417.)

There’s nothing really that new under the sun, is there? Especially where Commies are concerned.