According to Guido Fawkes, Sadiq Khan lied about the approval process for the Trump baby blimp:

Despite his long-running feud with Trump, Sadiq Khan was insistent at the time that the decision was solely that of the Greater London Authority (GLA) as a “corporate body” and that he had not personally approved the blimp. In fact, emails obtained by Guido reveal that the GLA initially rejected the proposal outright, only reversing their decision after a concerted campaign from Sadiq’s closest advisers including his Director of Communications Patrick Hennessey.

A story about the London mayor caught in a bare-faced lie to the public generates zero press interest. But that’s hardly surprising, is it? Because Theresa May engaged in one of the most outrageous and shameful episodes in British politics in recent decades, where she had Cabinet ministers preparing what they thought was the UK’s Brexit package, only to have a secret civil service unit work behind their backs coming up with the real UK Brexit package,and she has completely got away with that scot-free, so far as the press is concerned. It’s gone down the memory hole.

The fact that she screwed over the official Brexit team, and the rest of her party, and her country, was swept under the carpet once the media realised that her Chequers proposal was the closest they were going to get to Remain. And now the Daily Mail editorship has been taken over by a Remainer in Geordie Greig, they’re on-board too, and May will be feted as long as she stays that way: 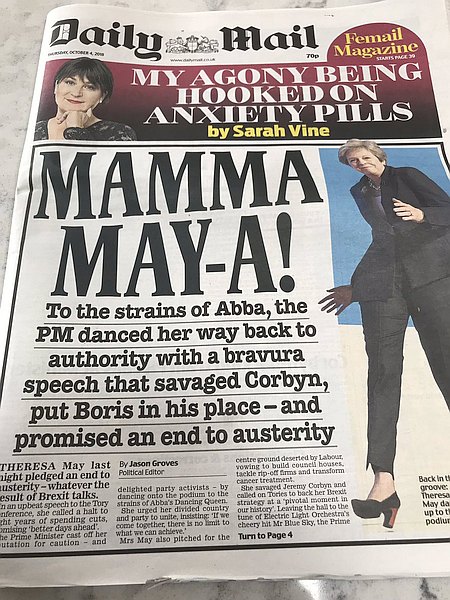 The fact that May is now loathed by the vast majority of Tory members and conservative voters is not an issue, because they don’t matter. The fact that she has made a shambles of Brexit and plunged her party into an unprecented crisis doesn’t matter, because she’s ‘dancing her back to authority’. What matters is whether the bubble currently approves of your behaviour.