One of the ways the left wins is by constantly breaking the law with its protest actions and getting away with it. This is related to the ‘double standards’ issue I’ve talked about before, where the left gets away with things the right can’t get away with, because it controls so many important institutions, as well as most of the media.

The left thinks that you’re allowed to do anything, as long as your actions are a sincere form of political protest (assuming, of course, that you’re on the left). This attitude has been encouraged for decades by movies, TV, books, newspapers, academics, and so on. And mostly the left does get away with this. What’s more, it gets treated with kid gloves when law enforcement is finally forced to act. 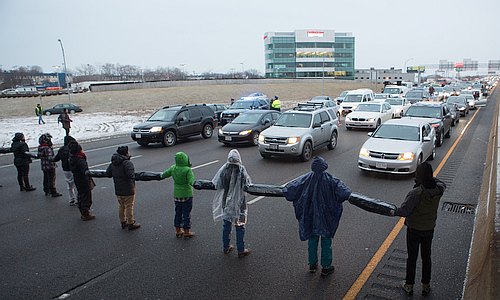 This is one of the symptoms of the weakness of modern Conservativism. Governments that are supposedly conservative have been able to do little about illegal protesters, mainly because they’ve feared an Establishment backlash if they insist that that the law be enforced against leftist protesters. One of the things we desperately need from future Conservative governments is that they fight vested interests to make sure that leftists are properly prosecuted for their illegal behaviour.

Consider, for example, the situation in Democrat-controlled states like California, where black-shirt Antifa thugs get away with all sorts of fascist behaviour. Consider the environmental protesters all over the world who are allowed to halt work indefinitely by putting their bodies in harm’s way. In Britain and the US you’ll see protesters blocking traffic and the police act as their protectors rather than their arresters. Not to mention the millions of illegal immigrants in the West who will never be deported.

That’s why I was pleased to see this story:

Sweden is to prosecute the 21-year-old student who single-handedly grounded an aircraft preparing to deport an Afghan asylum seeker.

Elin Ersson broadcast her one-woman protest on Facebook in July, during which she refused to sit down on the flight from Landvetter airport in Gothenburg, thereby preventing it from taking off …

On Friday, Swedish prosecutors announced that Ersson would be prosecuted at Gothenburg district court “for crimes against the aviation law” after the incident on 23 July. She had not complied with the captain’s request and had refused to sit despite repeated requests from the crew, prosecutors said. She faces a fine and up to six months in jail.

She should really have been pulled off the plane and arrested by the police straight away. But at least the Swedes are prosecuting her.

Before you start feeling sorry for her, bear in mind that there would be no mercy for any right-winger who pulled a similar stunt. Look at the way the British Establishment have treated Tommy Robinson. Far from the right being the cold-hearted hard men about such things, it’s the left who are ruthless (as they always have been). If you’re not one of them then don’t ever expect them to treat you the way they treat their own.

And if she is allowed to get away with this, then such tactics will just ramp up.

As for my claim that leftist protesters don’t consider themselves criminals, see this quote:

“Elin’s bravery has inspired a lot of people,” said Gudrun Romeborn of the group Sittstrejken (Sitdown Strike), in which Ersson is active.

“But it is important to understand why so many people in the community are working for justice for asylum seekers in Sweden. They are not criminals. We are trying to stop deportations to save lives.

This is partly right. Technically she will be (if convicted) a criminal, but in the right parts of Swedish society she’ll never be regarded as one.

Notice also the complete absence of any sort of apology for blocking the deportation of a man who turned out to be a criminal.

But now for the bad news. Do you really think she’ll go to jail for six months? Three months? No, not me either.

3 thoughts on “Enforce the law”