One of the best things I did years ago was to stop buying weekend newspapers. I was finding that you’d spend hours of your weekend time reading all the endless supplements, and then you’d feel somewhat disgusted with yourself that you’d wasted so much precious time reading what was in reality a load of piss-poor garbage from hacks. Plus all those papers every week cost money, and also your house would fill up with piles of newspapers everywhere. I found my weekend life improved a lot when I stopped buying them.

But now that the supermarkets give out free newspapers — at least our local one does — the weekend papers are making an unwelcome comeback in our house, thanks to my wife. At least I’m better now at not reading through all the endless rubbish in them. And I can also mine them for blog material.

One thing you notice about all the colour supplements is that they’re clearly run by modern feminists. Rose McGowan always seems to be a cover somewhere, despite being a screaming ratbag. This week it’s the turn of model and feminist Emily Ratajkowski, who gets a Times cover on the basis that she’s a feisty feminist, but also easy on the eye (if you like Leslie Ash-style rubber lips, that is).

“My youngest sister tells me she’s really smart”, says the interviewer. I searched in vain for anything in the interview that indicates that Ratajkowski is clever. Her hero is Naomi Wolf, so I’m not going to bother going to her Instagram page looking for wisdom.

But the male interviewer begs to differ: “She sounds like Marcel Duchamp”, he says, after some banal observation from Ratajkowski. I’m not making this up, you can see it on the graphic below.

One thing I do find out is that her parents were an English Professor mother and an artist father. So it’s not suprising that she’s full of shit. Young leftists tend to either have been brought up that way by their parents and family friends who soaked them in it, like fundamentalist Christians, or they have rich absent parents, or at least a rich, absent father, and the leftism is a reaction against that. With her it was clearly the former:

Dinner time at the Ratajkowski household was quite “intense”, she says. “My grandfather always said to my mum, ‘Let’s talk about ideas.'” They talked of art and politics.

Here’s the result of that ‘freewheeling’ highbrow talk:

Marriage is really to me what you want to take from it, because the history of it is like a joke.

Perhaps I should have mentioned that she mostly grew up in California. She also uses the word ‘woke’ non-ironically.

You may remember that she recently took part in the sheep-like protests against Brett Kavanaugh’s imaginary crimes:

You mean those allegations against Kavanaugh that are now falling apart?

They were with a group of seasoned activists, practised in obstructing public spaces

I thought professional protesters were a myth?

“What was interesting was that the people who were arresting us were women, people of many different ethnic backgrounds, and you’re looking at them thinking, ‘I wonder what you think about this?'” she says.

Maybe they were thinking that evidence matters, and how their family had come to the US to get away from dumb leftists? 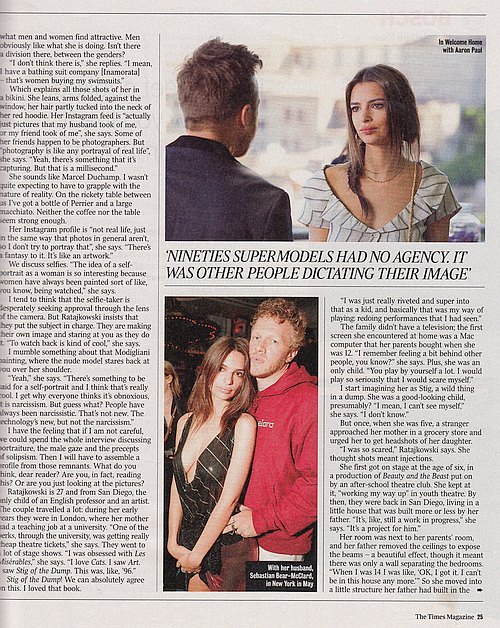 “Listen, my whole thing is that if you can’t take a women seriously because you’ve seen her without clothes, then that’s your problem.

Well, if you want people to take you seriously and they won’t because you take your clothes off on Instagram all the the time, then I’d suggest that it’s very much your problem. When I sent letters to my local council telling them I didn’t agree with their proposal to cut the speed limits to 20mph and they ignored me, that wasn’t an issue for them, was it? I was the one with the problem. Even if you’re in the right and they’re in the wrong it doesn’t mean you don’t have a problem.

And cavorting naked isn’t necessarily a bar to being taken seriously. Germaine Greer showed off her anatomy in greater detail than Ratajkowki ever has, but that didn’t stop her from becoming a Cambridge professor. The difference is that Greer actually has a brain (well, compared to Ratajkowski she does), and she did some scholarly work, rather than just continuing to show off her anatomy and spout cliches.

“We have this culture of men, especially, watching pornography, but then [they are] offended by a classic nude portrait or photograph, and I’ve never felt that way.”

I challenge Ratajkowski to produce one single living man who has publicly stated that he is offended by a classical nude portrait, but who also watches pornography.

If she doesn’t answer that’s her problem, not mine.