The MP said that the rise of fast fashion, where t-shirts are sold for just £2 and dresses for £5, means clothes are worn once then thrown away, where they end up in landfill.

So says yet another a Labour MP who hates the fact that more products are now cheap enough for poor people to afford. Mary Creagh, chair of the Environmental Audit Committee, is basically advocating making clothes more expensive so people can’t afford to throw them away when they like, and they have to sit at home and darn them when they get torn or a button comes off.

The Waltons, it turns out, was utopia. The Handmaid’s Tale was a better guide for the modern gal than Sex and the City. I suggest Mary goes to live with the Amish. 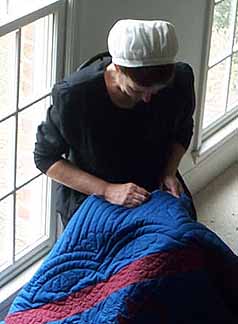 Mrs Creagh asked Primark how they can justify selling T-Shirts for as low as £2.

Yes, a Labour MP really asked that question. She really asked how can a company can justify selling clothes for a LOW price. The modern Labour party is basically now the old Conservative party. A party of snobbish upper-middle class matrons looking down their nose at grubby poor people who buy cheap tat. (Not that there’s anything wrong with a bit of humorous sneering at that sort of thing. It just shouldn’t be made the basis of public policy.)

They are turning it away as they can’t sell it so fabric either goes to Europe or the developing world.

Hang on, you just said they go to landfill. Now you’re saying this stuff get used in other countries. Isn’t that a good thing? Aren’t we always told that charity for overseas countries is a wonderful thing?

It’s disrupting markets in other countries.

Suddenly you’re concerned with markets rather than charity. Better cancel the overseas aid budget then.

This isn’t a joke, though. This comes from an Environment Select Committee investigation into the impact of clothes production. The media is on-board, as are several CEOs. This sort of thing usually presages the start of some government left-wing power grab, run by incredibly stupid leftists. And yes, they are incredibly stupid:

Carol Kane, joint CEO of Boohoo, was asked by the committee how the company could sell dresses for as little as £5 when the minimum wage was £7.83.

how does Tesco sell a Snickers for 60p when the minimum wage is £7.83?