Is there any more terrifying phrase in the modern English lexicon than ‘Sort yourself into small groups and discuss this please’?

You can’t get away from it. Every meeting or public speaking event these days has to feature one. Small-group discussion is de rigueur no matter what the context. I’m expecting a workshop now every time I turn up to something that has more than two people there. Next gig I go to I fully expect the band to do half their normal set and fill in the rest of the time getting people sorted into small groups with buttons they can press to signify agreement or disagreement.

This is especially the case when someone is being paid to give a talk. Why waste your time writing down something that might interest and entertain your audience, when you can get them to do your work for you? Why spend your days trying to work an hour’s talk into a proper shape when you can get away with fifteen to twenty minutes of introductory pap, and then fill up the rest of the time getting groups of three or four utterly bored and uninterested people to talk about it themselves, and then report their bored, piss-poor observations to the rest of the room, who all nod their heads and pretend that something worthwhile is being said? 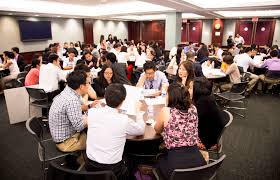 British people generally don’t like this sort of thing, but they put up with it because it’s the latest done thing, and they don’t like to be seen making a fuss. (Americans may be more enthusiastic.) Anyone who tries to get out of it will immediately be publicly shamed — I know, I’ve tried it a few times, and it’s like saying you voted Brexit at women’s group meeting. The level of aggression immediately displayed towards anyone who doesn’t play the game is quite disturbing.

Also, British people tend to think that the crapness of their discussions is down to their own inadequacies. But it’s not. Every discussion in a workshop setting — except for those where it’s really important to do it, and the people involved have a real motivation to do it well — is crap.

Small group discussion is, of course, suitable for seminars/tutorials at University. That’s their proper place, where the point is (or used to be) to develop bright young minds. But even there they’re mostly crap, and mostly painful for everyone involved. They’re not something you want to do again once you leave University. On the contrary, most people who’ve got their BA never want to do one ever again. If they do, they want it to be a high-level workshop with, say, other brilliant graduate students so they can finally have a tute which isn’t full of morons.

But generally workshops outside the University context are even worse, because there’s no degree result at risk, and you’re just doing it to please your boss, or your wife or husband, and there’s no lecturer who really knows the area bringing some focus to the discussions, and filling in with useful material when conversation dries up. It’s just forty or ninety or whatever minutes of pain, when beforehand you’d gone in expecting to hear someone with some expertise talking about what it is they have expertise in, and giving you some knowledge, but instead you have to hear a load of people with no expertise in the area, including yourself, talking a load of embarrassing tosh to fill in the time because the person who supposed to have expertise either doesn’t have it, or they just couldn’t be bothered writing a proper talk.

The supposed rationale for workshops is supposed to be that you will absorb the material better if you’re engaged in it rather than being a passive recipient, and there is some truth in that if it’s a serious topic that you really want to know more about, and you have a pretty good idea already about it. But as anyone who ever went to a University tutorial/seminar unprepared can tell you (and that’s pretty much every Uni student), a tutorial/seminar that you go into without knowing anything about the topic is useless. And any tutorial/seminar that you go into where you aren’t really motivated to participate in properly is also a waste of time, even if you do know something about it.

And I’ve even been to workshops (outside the University context) where the people involved were knowledgable, and were keen to learn, but it was still rubbish. That’s because workshops just don’t suit most occasions — generally it’s a very inefficient way of transferring knowledge. It’s also because, as I said above, a workshop is usually an excuse for lazy speakers to avoid doing the work they should have done and passing the buck to the idiots who were stupid enough to waste their time turning up.

So from now on I’ll never again attend anything — any sort of occasion at all — without first checking whether it involves a ‘workshop’. If it does, it will do so without the use of my forced labour as a part of it.