Natalie Solent at Samizdata quotes from a Times review of Brexit: The Uncivil War:

This endless fudged crap about the Brexit bus is getting tedious. There were two main sentences on the bus. The first was “We send the EU £350 million a week”. The second was “Let’s spend it on the NHS instead”. The second sentence is a suggestion, so it can’t have a truth value (ie. it can’t be true or false because no claim is being made). 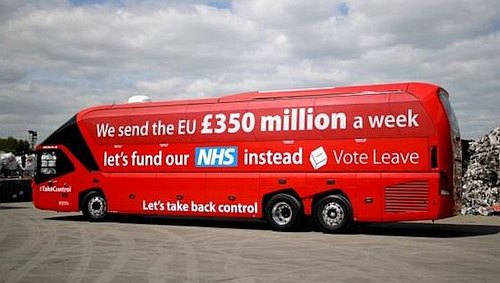 Only the first sentence can be true or false. Was it false? No, we do send the EU £350 million a week (more, in fact — at the time it turns out that at the time we were sending the EU on average £363 million a week).

(All these figures taken from the ONS link above.)

The other thing Remainers say is that the figure on the bus also ignores the fact that another £86 million comes back to the UK to be spent on various EU-approved projects, so the real figure is lower again: it should be £181 million a week.

But the Remainers are wrong here. The fact that the EU spends this money in the UK is irrelevant, because they don’t spend it on the NHS. Therefore that money would be available to spend on the NHS if we left, just as the bus suggested. The Leave campaign is right about this, and the Remainiacs are wrong.

Some Remainers still like to say — well, scream actually — that this ignores the fact that the money still comes back to the UK, so really, it shouldn’t be counted because it’s our money again, not the EUs. As I said above, this simply ignores the fact that the bus’s suggestion was that we could spend this money on the NHS instead, which indeed we could. And more generally, it ignores the fact that this money is spent on things that the EU deems suitable, not the British people. If I am forced to give an amount of money every week to some gangster, who gives some of it back to me but only on the condition that I give it his cronies to fund their lifestyles, you’d hardly say it was my money again.

The same applies to sending money to the EU. It’s the gross amount that we send that counts, not the net. (I’m not including the rebate money here because that money does come directly back to the government.)

In fact, this applies ten times over with the EU because while some UK government spending undoubtedly does benefit me (the NHS, and roads, for example), very little of what the EU spends its money on benefits me, nor does it benefit the average person much.

And even if it did, it doesn’t make the bus’s message a lie. The whole point of the bus’s message was that we send a lot of money to the EU (which we do), which spends it on what it deems worthy, when we could be in control of that money and spend it on what we deem worthy, such as (if we so decided) the NHS. As the last sentence of the bus said, let’s take back control.

Update: You know, there really should have been a Remain bus driving around with the message “Don’t bother voting Leave as John Bercow and Parliament won’t let it happen”.