↓
Home→Commies→Another revolutionary who was a great family guy (not)

In 1902 Lev Bronstein, aka Leon Trotsky, was in exile in Siberia, with his wife Alexandra and two young daughters. Upon learning of a bit of mild revolutionary intellectual activity in Europe (a new radical newspaper, and a book by Lenin) he suddenly decided that he should be a part of it, so he resolved to escape from exile. And so he escaped… leaving his wife and two babies behind.

He later made the claim that Alexandra had wholeheartedly blessed his departure. This is hard to take at face value. Bronstein was planning to abandon her in the wilds of Siberia. She had no one to look after her, and she had to care for her two tiny babies all on her own with winter coming on. No sooner had he fathered a couple of children than he decided to run off … he was acting within the revolutionary code of behaviour. The ’cause’ was everything for the revolutionaries. Marital and parental responsibilities had an importance but never to the point of preventing young militants from doing what their political conscience bade them to do …

Even if Alexandra really did give her consent, Lev showed little appreciation of the sacrifice he had asked of her. ‘Life’, he said, as if it were a simple matter of fact, ‘separated us.’ In reality he had chosen to separate himself from his marital and parental responsibilities. (Robert Service, Trotsky, Pan, 2009, p.67)

He never tried to get back together with Alexandra or the children, even after they left their exile in Siberia. It wasn’t like Alexandra was a bad wife or an unpleasant person, or anything like that. It wasn’t so long ago that Trotsky had implored her to marry him. 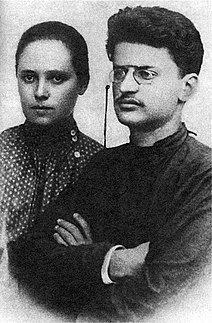 He soon found a new woman in Paris to comfort him. Trotsky’s parents and sister did most of the child-raising. Trotsky was always too busy writing his revolutionary articles and engaging in revolutionary activity to bother to have anything to do with them. But intellectuals all over the world thought that society should be run along the lines set out by a man who neglected his first two children, all because he had a whim that he was too important to be tied down with them.