Perhaps the only good thing about the Brexit delay, which seems to have been stitched up without a peep from the Brexiteers – I hope they’ve got some good ideas stashed away, but I’m not getting my hopes up – is that all the crowds of Leavers arriving in Westminster on the 29th can really have some impact.

Most people don’t yet understand that EU/international law is going to be taken by the government as trumping domestic law:

The law of the land remains the same. We leave the EU on March 29th. Only a new statute can change that. When the Government try to bring one forward, the 500+ MPs who stood on a manifesto to leave & promised to honour the Ref result should remind the Govt of this & vote it down.

Hopefully the masses assembled at Westminster on March 29 will erupt when they realise this. But I suspect it’s going to be a fair accompli by then. 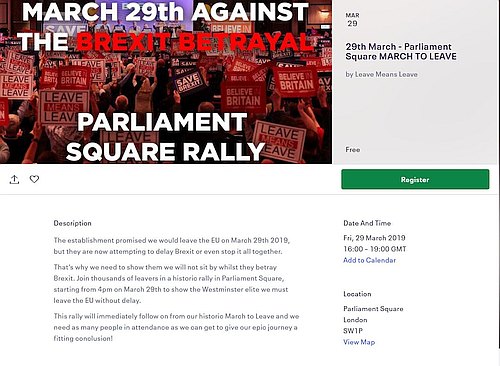