I am serious — Steve Bell, the long-time Guardian cartoonist is a national treasure. He should be knighted one day, and buried in Westminster Abbey. For over twenty years the Guardian has chosen to publish his political cartoons. This has been a Godsend to right-wing political figures, because Bell’s cartoons are probably the least funny cartoons in the history of publishing. For the average person seeing one of his cartoons produces a feeling of incomprehension, and a vague feeling of sadness at the waste of a life. The one thing is does not do in anyone, other than a committed and slightly dim left-winger, is produce feelings of mockery and scorn for the right-wing figure depicted.

Can you imagine how things might have been different had the Guardian employed a cartoonist with a sense of humour? (Bell is like the prototype for all these modern comedians who insist humour must not be funny.) A cartoonist who really could skewer politicians with a few lines and a few choice words? A cartoonist who could really change minds and attract more converts to the left? The left might have triumphed across every corner of the country if they’d had a left-wing Matt taking up half-page spreads.

But luckily for us they are humourless arses who decided to employ a man whose cartoons wouldn’t have even been good enough to make it into the student rags that I used to work on. Even the left-wingers on staff at those places would have literally screwed these cartoons up and thrown them in the bin, shaking their heads at the dearth of talent on their side. But the Guardian employed this man, and thus guaranteed that any average person who was unlucky enough to catch a glimpse of his work was so repelled that they resolved never to vote for the left, and never to read the Guardian for as long as they lived, not even if they were desperate to know the cricket scores and someone was handing out copies of the awful thing for free.

Long may Steve Bell reign as the right’s greatest weapon.

Update: Soak in some more genius: 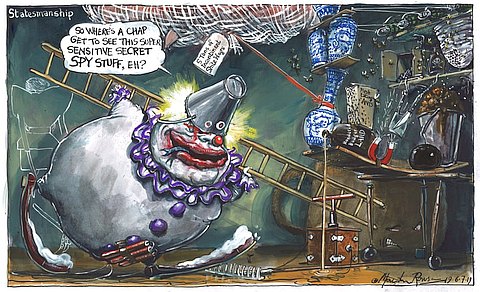 Subtlety be damned. When a take is this spot on you’ve got to just publish it, even if most people will think it ludicrously partisan and crashingly unfunny.

5 thoughts on “Thank God for Steve Bell, he literally wins elections with his cartoons”