It seems that on the government’s team only Dominic Cummings really wants Brexit:

On Wednesday, the Prime Minister appeared to row back on Cummings’ suggestion that the Tories would have to fight the next general election on a no-deal pledge to “marginalise” the Brexit Party in a move that prompted anger among Tories in the Commons tearoom.

Mr Johnson is understood to have reassured Damian Green, chairman of an 80-strong One Nation caucus that the party’s next manifesto will still promise to get a Brexit deal, not an automatic no deal.

Remember that Dominic Cummings is not a Conservative party member. The Conservatives themselves can’t be trusted to deliver Brexit.

If Boris Johnson gets an extension past Oct 31 and then campaigns in a general election for a deal then the Tories can forget about ever getting the support of most Leavers, who will switch on masse to the Brexit Party.

In fact, they should pull out of negotiations right now. Just shut up shop and say ‘Prepare for No Deal. It will be fine, we’ve got it covered’. Then see how the EU reacts. And let dozens of wet Tory MPs resign.

Of course Parliament will have a meltdown over that. Let them.

Update: Do you still think Johnson’s a No Deal man? 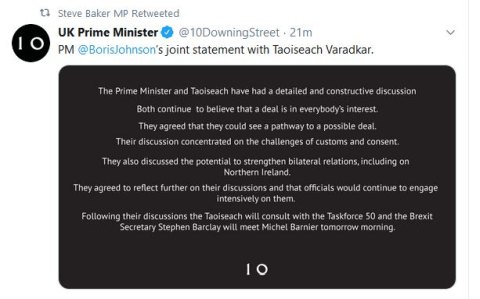