I’ve noticed how progressive feminists who want to break down the ‘gender divide’ and fight gender stereotypes often embody, when you closely at them, certain traditional feminine stereotypes.

A recent example happened with Flora Gill, daughter of AA Gill and Amber Rudd, who made the news recently when she complained about a man who took her virginity and then ghosted her. 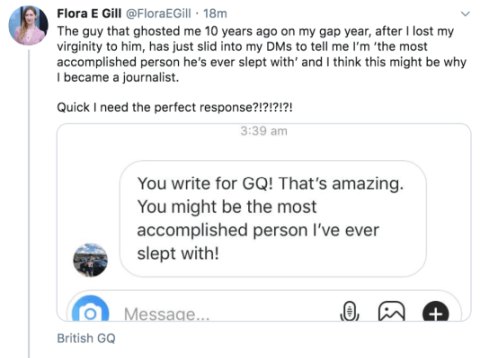 I’m not saying they’re wrong to complain about it. Just that their belief system doesn’t really add up.

Zoe Strimpel has noticed something related to this – the younger generation are just as disapproving of affairs as people were in times gone by:

when it comes to ‘having a sexual relationship to someone who is married to someone else’, attitudes haven’t softened at all. In fact, this was the only issue on which people have become less tolerant: in 1989, 52 per cent of people thought sleeping with a husband or wife was wrong; now it’s 55 per cent, with the larger rise in disapproval among men.

And who are the people most intolerant of affairs these days? Progressive feminists. And who are the people most likely to be vocal about their intolerance of affairs? Progressive feminists once again. They may talk about empowering women and all that malarky, but when it comes to holding certain sorts of traditional feminine attitudes the progfems beat the WI hands down.

(Sure there’s been a rise in polyamory recently, but that seems to just be a way of allowing progressive feminist women with partners they’re unsatisfied with to have affairs without suffering the same blame they like to throw at men who have affairs.)

It’s no wonder the concerted, decades-long campaign to break down the gender divide has met so much resistance when so many of the leading lights of that campaign can be seen to be engaging in the very thing they say they want to get rid of.