↓
Home→Feminism→Apparently naughty fun has an evolutionary ulterior motive. Who knew?

Judith Woods continues her downhill slide, bemoaning the fact that it’s been discovered that the clitoris plays a role in reproduction:

Apparently the clitoris (incidentally the word is derived from kleitoris, originally Greek for door-keeper) has an important reproductive function too. When it is stimulated (sorry, getting a bit graphic, Lady Violet) it triggers internal changes, making reproduction more likely.

Apart from the obvious (don’t make me say it) ahem, enthusiasm this generates for the act, the clitoris plays a pivotal role in shifting the position of the cervix, thus preventing sperm from entering the uterus too rapidly, before they have had a chance to activate and become motile. Well that’s a relief to know. Or is it?

Writing in the Clinical Anatomy journal, sexual health expert Dr Roy Levin said he had reviewed 36 studies and papers and had concluded: “The often repeated mantra, that the sole function of the clitoris is to induce sexual pleasure is now obsolete.”

According to Ms Woods this is a heavy blow for both romance AND feminism (two words which don’t often go together, except in an antagonistic way). Not to mention the pleasure temporary couples might derive from one-night stands.

But while there may be a bit in what she says, we can see that it’s generally overblown by noting that we’ve known for thousands of years that the purpose of the old fellow rising to attention is not just – gasp! – for the pure pleasure of the owner of said flagpole, but to facilitate the making of blended copies of the couple engaged in the act of ‘ultimate romance’, yet Mills and Boon and feminism and one-night stands all continue to thrive despite this knowledge being wedged into the brains of all but the most primitive tribes (and no, I’m not referring to buildings full of gender studies PhDs).

And the purpose of the… perhaps I’ll stop there. Suffice it to say that human beings alone amongst the Earthly animal kingdom are aware that the function of [insert your favourite romantic/erotic/disgusting-but-addictive-fetish act here] is not just to allow two grown-ups to express their love/get their rocks off/empower wymmin, but to squeeze out organised collections of proptoplasm which resemble their sweaty enablers to a much-greater-than-chance extent, yet still love and marriage and families and singin’-in-the-rain and pornographic literature and mummy blogs continue on their merry way.

So perhaps Judith can stop worrying. Or, at least, find some better material for a half-arsed column which seems to have less thought put into it than a blog post written by someone who isn’t paid a full-time salary just to produce 419 vaguely-interesting words a week. 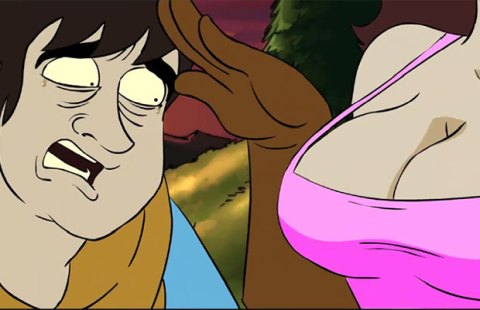 In Woods World this will be every man’s reaction once they discover the hitherto-unknown fact that women’s thorax adornments are not just for the woman’s own pleasure (or his), they’re also used for feeding the resulting gene-splice. Yes, the selfish little Winstons suck on the very same fleshly faucet that the gullible couple imagined was purely about va-va-voom, in order to keep their tummies full of vanilla shake. That is why the world is full of innocent women in maternity units who have just punched out a slab saying to their mothers, ‘You want me to stick what in bubba’s mouth’?

You see, Jimmy, dual-purpose organs destroy sexual pleasure. Or, at least, they do in Judith’s imaginary world, inhabited by… nobody at all.