It turns out that Joe Biden was all along this genius surrealist comedian doing an act, and we never spotted it until the sheer amount of quality material became overwhelming:

Biden: "I got hairy legs that turn blonde in the sun. The kids used to come up and reach in the pool & rub my leg down so it was straight & watch the hair come back up again. So I learned about roaches, I learned about kids jumping on my lap…" pic.twitter.com/GXSgRVSti6

Seriously, though. This man is actually leading the polls for the Democratic nomination. Months ago pundits from all over the political spectrum were declaring that Biden was finished, that the Democrat party was going to make sure that he was taken down. He was too old, too gaffe-prone, too senile, too creepy with young girls, not woke enough, plus it was starting to look like he’d enriched his family using his connections with Ukraine. And you had to think they were right. So how has this corrupt old weirdo, a man going around with a bus with the slogan ‘No Malarkey’ on the side, like he’s the Abe Simpson candidate, doing so well? 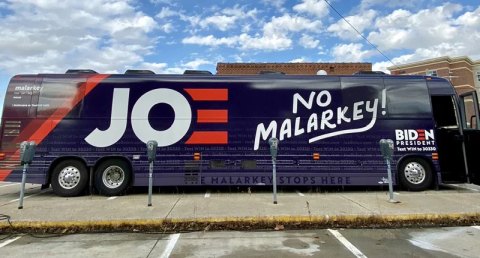 The only answer that makes sense to me is that… his rivals are Bernie Sanders, Elizabeth Warren, Pete Buttigeig, etc.