Newspaper headlines, especially in the Daily Mail, always try to make it sound like long sentences were given for dramatic crimes:

Dramatic bodycam footage shows officers pinning a man on the floor as police smashed a crime ring involved in raiding cash machines across the South East.

The driver was hauled out of his vehicle and restrained while officers discovered an ATM stashed in the back of the specially adapted van.

Five men who formed part of an organised criminal network have now been jailed for a combined total of over 22 years, Kent Police said.

22 years! But hang on… that’s for five men. That’s an average of four and a half years each. Probably be out in two.

Video taken of the back of the van shows how the roof had been gouged open to allow for a cash machine to be dropped into it quickly.

A couple of years for a large and destructive bank robbery.

Detective Inspector James Derham of the Kent and Essex Serious Crime Directorate said: ‘These men had absolutely no regard for the damage their crimes had on the communities they targeted.

‘They put the public in danger with their reckless actions, crippled businesses, caused hundreds of thousands of pounds worth of damage and stole plant machinery which prevented businesses from moving forward with building works.

‘In short, their selfish actions had severe consequences for many people including the local communities who relied upon these facilities.

What a good thing, then, that they’ll be in jail for … less than a thousand days each. Do you think, judging by their mug shots, that they may try again? Or will they become reformed citizens in jail? 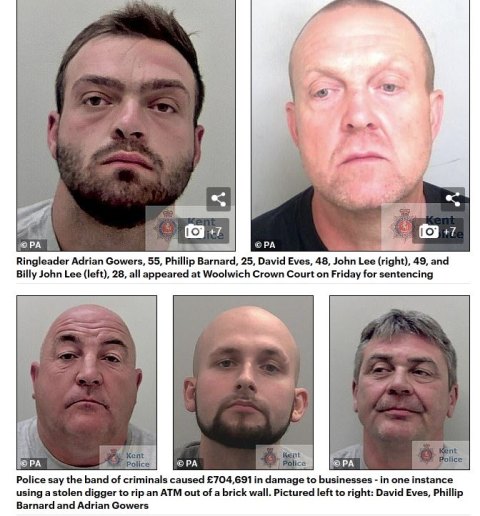 ‘The officers involved in the case worked with sheer tenacity to painstakingly piece together the movements of those involved and other key evidence, leaving these men with no other option but to admit their part in the conspiracy.’

All that hard work kind of seems pointless now.