Yorkshire Tea has urged social media users to “try to be kind” after the popular brand became embroiled in a row involving a leading Tory politician.

Chancellor Rishi Sunak posted a picture on Friday of him appearing to make a huge tea round for his Treasury staff.

The Twitter image led to calls by some on the left for a boycott of the brand.

This case really makes it clear that leftism is a substitute religion. The worst type of religion. Yorkshire Tea is now unclean, you see, because a Tory touched it, so now it’s tainted. 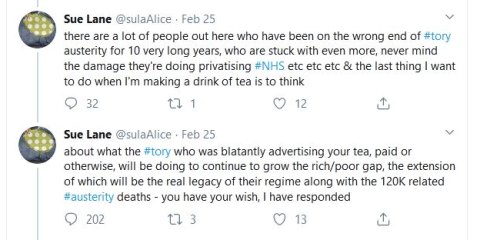 This is more akin to magical thinking than serious analysis.