It used to be that most BMW drivers were arseholes. In fact, it used to be that most of the arseholes on the road were BMW drivers. If there was anyone right up your arse even on a 50 road, you could be almost guaranteed that it was a BMW. If someone was flashing their lights at you in the outside lane of a motorway, even though you were already going 90, it was usually a Beamer.

Things have changed somewhat, though, because for a few years now the new arseholes are Audi drivers. Some BMW drivers seem almost normal now, although a lot still aren’t. But an Audi driver almost always spells trouble, which never used to be the case.

My theory is that a lot of arsehole BMW drivers shifted to Audi to escape the BMW-drivers-are-arses tag, but they still remained arses. And that inspired a new generation of arses to purchase Audis instead of BMWs.

Discussing this on Twitter recently at Godfrey Bloom’s blog, someone said this: 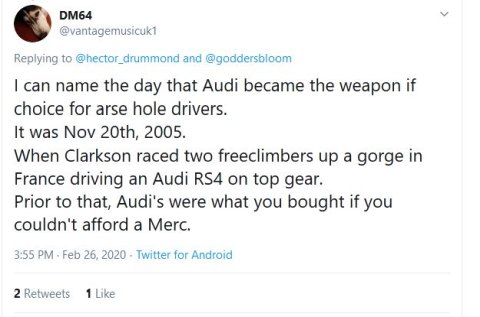 P.S. If you’re a nice Audi driver feel free to defend your clan in the comments.

11 thoughts on “Audi drivers are the new BMW drivers”