When I posted the graphs based on the ONS data for week 10, lots of people (mainly on Twitter, not here) said, ‘You have to wait a couple of weeks, then you’ll see something that will make you wet yourself in fear’.

Well, we’ve now got the graphs for three weeks later than that first batch, so let’s see if there’s anything showing yet. (If you saw my earlier posts you may get a sense of deja vu reading this one.)

The latest ONS data is here.

The first batch of graphs were done by a reader of this blog, David Clark, who does this sort of thing for a living.

Firstly, here’s a graph of the latest all-death numbers in England and Wales, up to 27 March (end of week 13). Bit of an uptick in week 13 after a downward turn the week before. Still no World War 3 though. (Click to enlarge.) 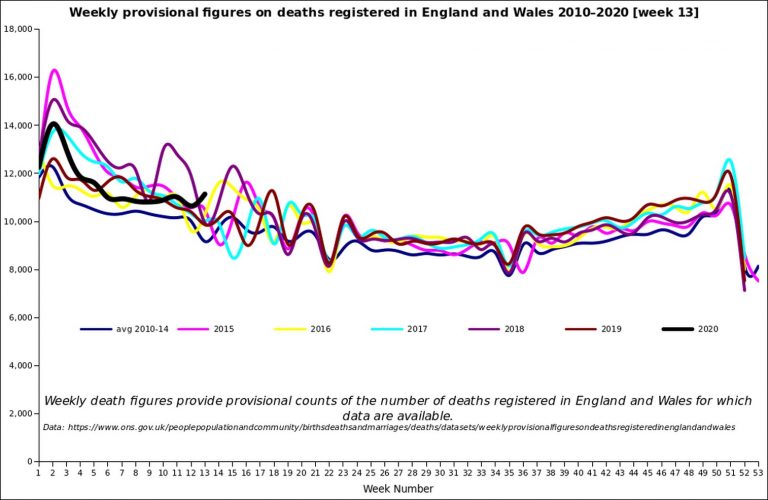 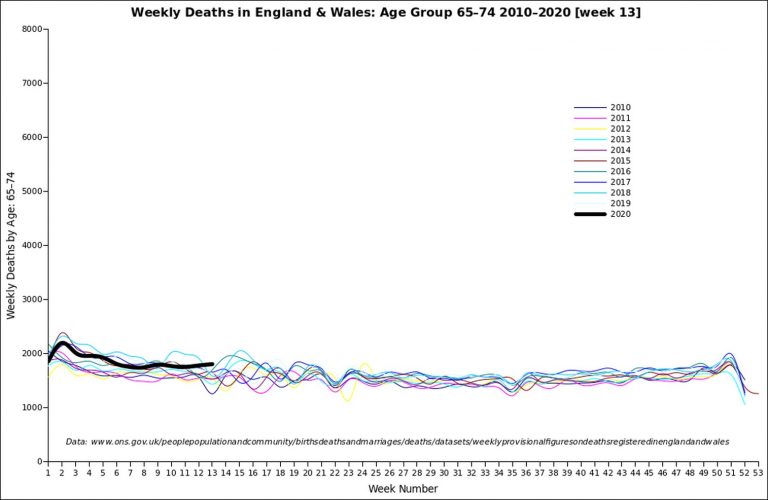 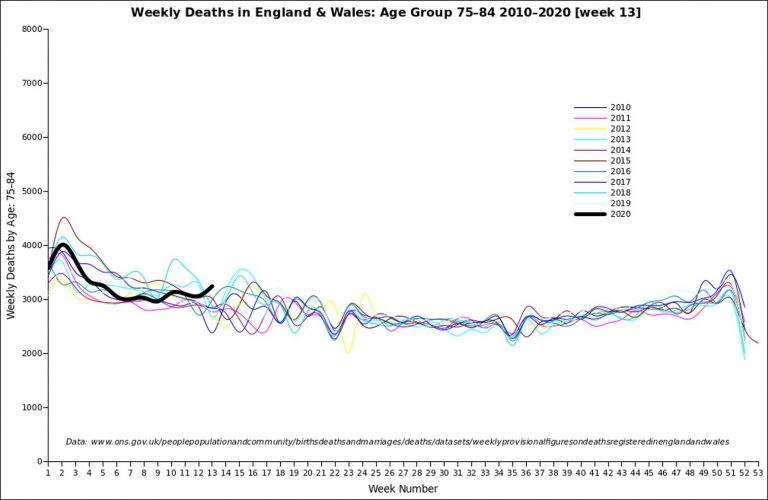 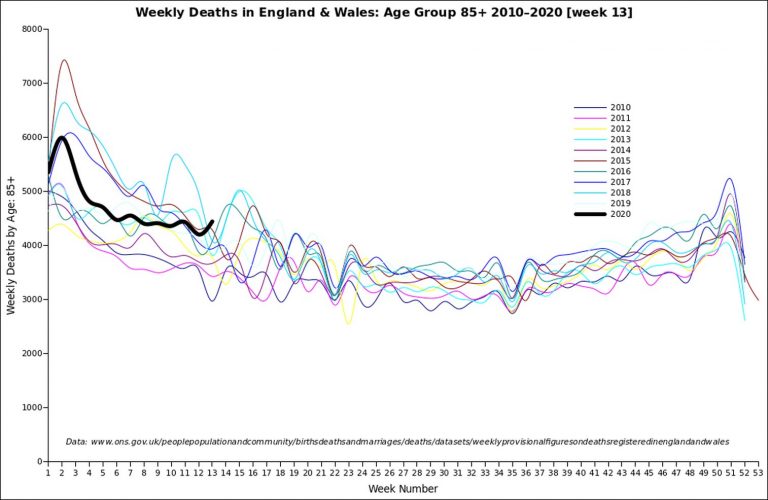 Now a graph of the all-death numbers in England and Wales, stratified by age group, up to March 27, 2020. All are in the normal range. (Click to enlarge.) 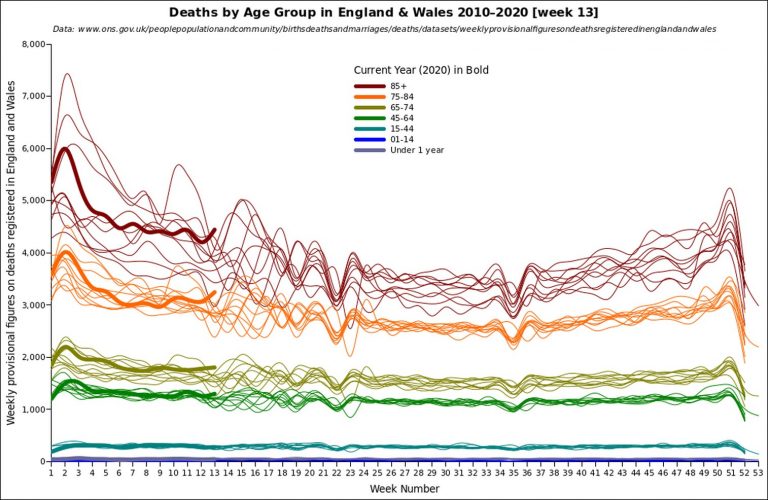 Now, moving on from the all-death graphs, we have a graph of the respiratory death figures from the ONS figures for England and Wales up to March 27, 2020 (end of week 13).

BTW the red dots indicate what the ONS is calling ‘Covid-19 deaths’. This is useless category that isn’t worth paying much attention to, I’ll explain why in more detail in a later post. (I have now got some terse but useful info out of the ONS). All you need to know now is that the ONS’s Covid-19 deaths are neither a subset of respiratory deaths nor additional to it, but they will partly overlap. Some C19 deaths will be respiratory, and included in that set, but we don’t know how many.

What’s astonishing about this graph is that despite there being 539 deaths in the Covid-19 category for week 13, the respiratory deaths total for that week is totally normal. There are two possibilities (maybe more) that could explain this.

One is the fact that the Covid-19 category includes people who die with Covid-19, but not necessarily of Covid-19. Unfortunately the ONS doesn’t produce a breakdown of the numbers who had as it as the cause of death on their certificate, and the numbers who just had it mentioned on their certificate (as Covid-19 is a ‘notifiable’ disease whoever fills out the certificate has to note if the person had, or was suspected of having, Covid-19). So we don’t know how much of an effect this has, but I would be surprised if it has no effect.

The second possibility is that many of the people who are dying of Covid-19 are people who would have died soon anyway, or at least, they’re people who are vulnerable to any viral infection (even a bad cold can finish off someone who is near death and whose immune system is shot). It’s very clear now that Covid-19 kills mainly (not exclusively, but mainly) elderly people who are medically vulnerable.

Now here are some more graphs done by Robert Watson, a retired Professor.

First up is a graph of weekly respiratory deaths in England and Wales from the ONS figures, up to 27 March again, with the prior five-year average in there for context (the blue line is 2020, and the orange line is the five-year average). 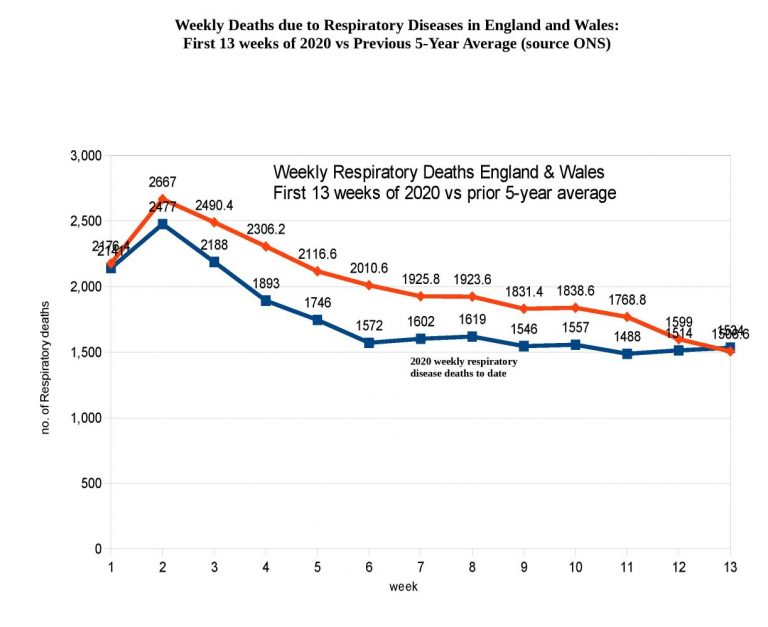 Week 13 is the only week of the year so far where there have been more (slightly more) respiratory deaths than the five-year average.

(Note that this is not cumulative, the blue line being higher than the orange line in week 13 does not indicate that 2020 has ‘caught up’ the five-year average in total deaths, just that that week 2020 was higher.)

And now here are the respiratory figures presented as a cumulative graph. Again, it’s for England and Wales up to end of week 13 (27-3-20), with the prior five-year average (orange line) in there for context. 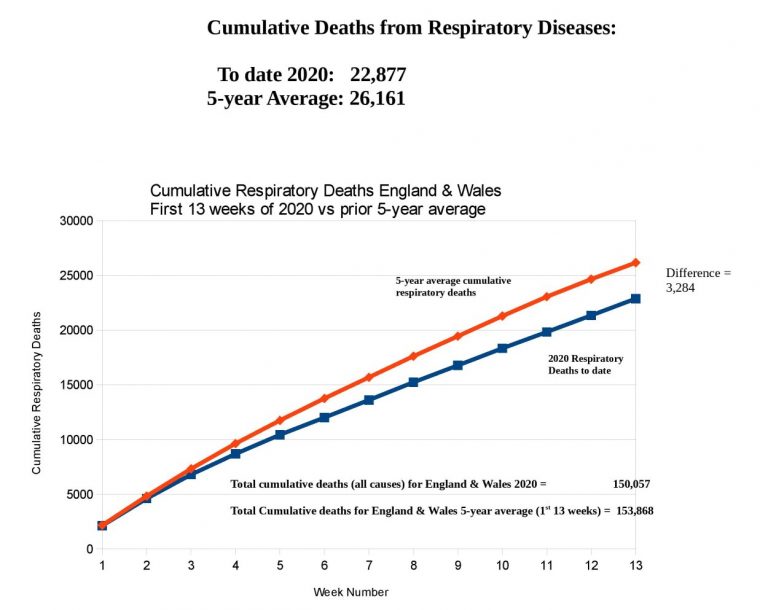 This means that up to 27 March there have been 3284 less respiratory deaths in 2020 than the five-year average.

(Before you ask whether ‘respiratory deaths’ includes Covid-19-related respiratory deaths, I have asked the ONS, and the answer seems to be yes, although everything with the ONS is as clear as mud, they don’t explain things properly.)

Even I am astonished by these graphs. I was expecting to see something in the graphs by week 13, even if I wasn’t expecting anything scary. But there’s just nothing. And you can’t say the lockdown caused this, because the UK lockdown had only been going for four days by this time. We’ve locked down the country for a supposed mass killer that still isn’t visible in the stats even after the lockdown was declared. We locked the country down for something that at the time only existed in Neil Ferguson’s dodgy computer models.

Thanks again to David and Robert for putting the work in. Once again I say: why isn’t the ONS doing graphs like these?