First, here’s a graph of the excess winter deaths in England and Wales going back to 1950, with a rolling five-year average in there as well, which is very revealing. These numbers are not even adjusted for population increases over that time (click to enlarge). 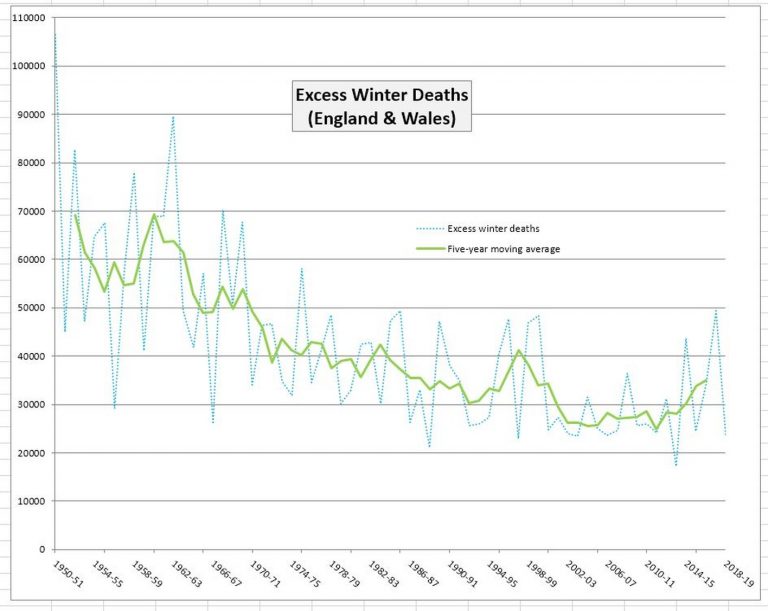 Anyone who wants to talk about a once-in-a-century mass-killer pandemic needs to get some historical perspective.

Laurence sent me his own thoughts on this:

The EWD figures from winter 1950-51 through to last winter shows that these can seesaw from one year to the next… This might be caused by a severe winter having a great impact on mortality which will have removed many vulnerable people from the population. The remaining population would consequently be relatively more robust and the EWD figure for the following year could be lower.

The five year moving average for EWD in the graph shows that actual year-to-year EWD oscillates quite markedly and although the average is rising towards the end of the period, actual EWD for last winter, 2018-19, was the fourth lowest and might reasonably be followed by an increase for the current winter.

We didn’t see many excess deaths this winter either, though, possibly because it was a mild winter (click to enlarge). 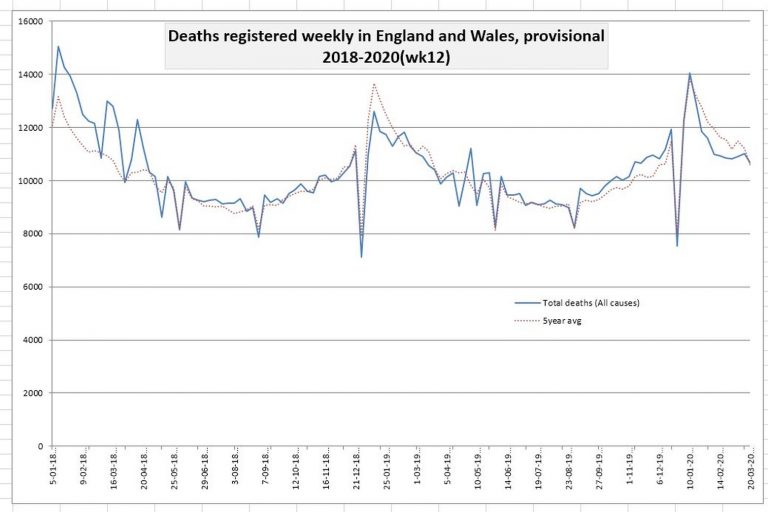 So it may well be that we have a build-up of elderly people and others with conditions who are vulnerable to a new disease coming in, so it would not be at all surprising to see some excess deaths in the next month, and particularly next winter.

Finally, there’s this graph of excess winter deaths from 2000, so you can see the recent years more clearly (click to enlarge): 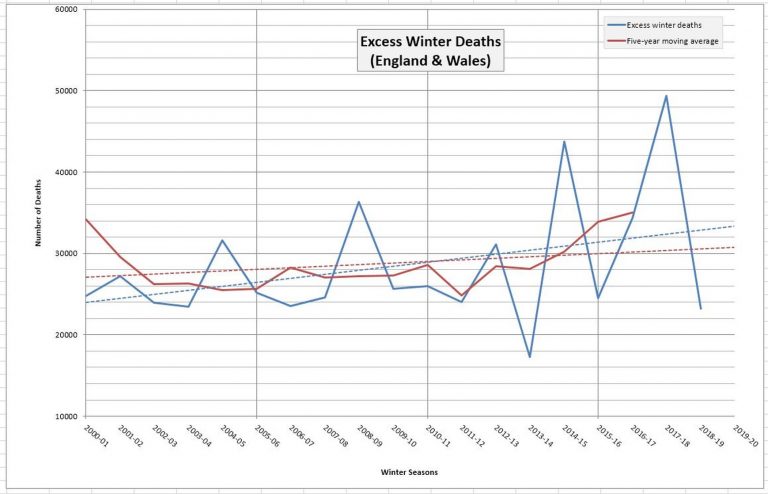 This makes it more clear that the winter of 2018-19 was low in regards to excess deaths, so combined with the low number of excess deaths that happened this winter, there’s a good chance that there will be more people vulnerable to a new disease that’s turned up.

In fact, we can see from this graph that it would have been completely normal to have had 50 000 to 60 000 excess deaths in the winter just gone, or even more. So it wouldn’t be at all surprising or worrying to have a mass of deaths over April amongst the vulnerable population who got through the mild winter, but who have just been hit by a new disease. The same applies to the winter coming later in the year, especially if it is cold.

Thanks to Laurence for the graphs and the discussion he sent me.

Update: Still got some other good graphs and diagrams people have sent me to put up, hopefully get them up later today, before the ONS release tomorrow (Tuesday).

16 thoughts on “A historical perspective on winter deaths”