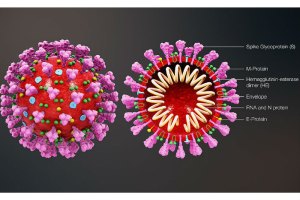 This article is by Simon Anthony, a one-time theoretical physicist.

Over the past couple of months many misleading or wrong statements have been made by the media about C-19. Unfortunately, a number of these errors haven’t been corrected and instead have been reiterated and amplified to the extent they’ve become established folklore, repeated without reflection or question. In this piece I’ll discuss a few of these rogue ersatz ‘facts’ and try to correct them.

Specifically, I’ve looked at erroneous statements or claims concerning the properties or predictions of models. SIR models are used for understanding how a contagious disease spreads through a population. They divide people into three categories: those who are Susceptible to becoming infected, those who are Infected and those who’ve Recovered from the infection (actually something of a euphemism as the category includes those who die. More precisely, it means people who’ve passed through the I category and been ‘Removed’ from the Susceptible category). Given the rates of spread and recovery, the model calculates how the number of people in each of the categories changes over time.

SIR models are simple and can be made more complicated and subtle. There are however certain properties and behaviours which are shared by all realistic models. I’ll discuss some of those features and the often incorrect claims which are made about them.

I should say that some of the myths aren’t obviously untrue. Unfortunately many people in the media have generally (with some honourable exceptions – John Lee in The Spectator comes to mind) haven’t taken the time and trouble to do the necessary thinking before writing about C-19. So I’ll try to explain clearly. If I fail, please point this out in the comments and I’ll have another go.

This is incorrect: R0 isn’t a rate (which would be in units of something per second or per day or week or other time interval); it’s a number. It’s the number of people infected by an ‘average’ carrier, not in some arbitrary time interval but over the period during which the carrier is infectious. It’s the ratio of the time during which a person is infectious to the average time it takes to infect one other person. Or the ratio of the rate at which the infection is passed on by a single person (infections per month say) to the rate at which a person recovers (recoveries per month).

2: ‘R0 is the single factor which controls C-19 infections’

This is incorrect: R0 is one factor in a product of three factors which together control the rate of new infections. Which factor is most important depends on how long the outbreak has been running.

The rate at which people become infected is the product of:

The rate at which the infection is passed on x the number of people who are infectious x the probability of meeting someone to infect.

The condition R0 = 1 is special only at the very start of an outbreak when everyone is susceptible so the susceptible fraction of the population is also 1. If at the outset R0 = 1 (and it doesn’t change), the number of infections is guaranteed not to grow (the initial carrier passes it to just one person who passes it to just one person and so on – at any time there’s (at most) just one infected person).

If R0 is greater than 1, infection spreads and the susceptible fraction falls. At some point, the fraction falls below 1/R0 and the outbreak recedes. So an epidemic can end while R0 is still greater than 1. In fact, this is ‘normal’ for contagious diseases for which there is no vaccine. This is ‘herd immunity’ – enough of the population has recovered (and become immune) that the susceptible fraction is less than 1/R0 and is “protected”. It may be that C-19 will be brought under control in this way rather than by development of a vaccine. 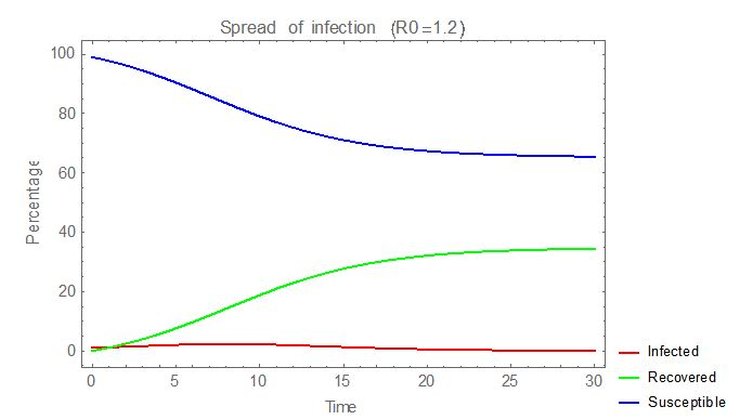 Herd immunity is present with ~35% of the population having been infected and recovered, ‘protecting’ the still susceptible 65%. Total mortality rate would be ~35% of the infection fatality rate.

In the early stages of the UK’s C-19 outbreak, R0 was estimated (by some) at ~3.5. Had it been allowed to run without check, this would have been the result: 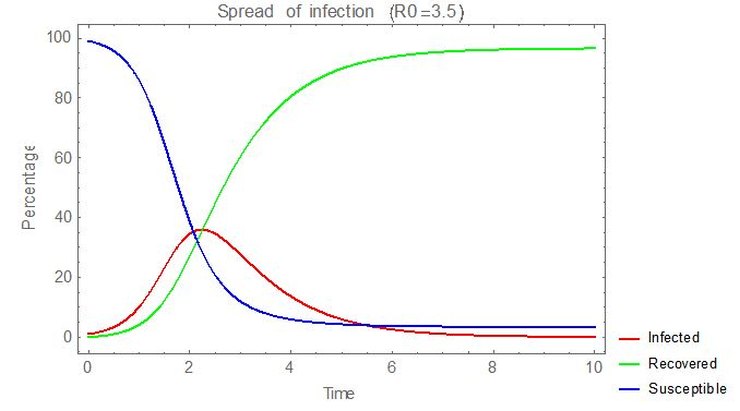 In this case, as only ~3% of the population would be uninfected, it’s misleading to call the final state ‘herd immunity’ as it’s so close to 100% individual immunity. Essentially everyone becomes infected and the mortality rate for the entire population would be the infection fatality rate, or about 3x that for an R0 of 1.2.

It seems likely that the UK government’s pre-lockdown policy was along the lines of hoping that, with the earlier voluntary distancing measures, R0 was just a little higher than 1 and CFR wasn’t much higher than for flu. Then something like the case above for R0=1.2 might have happened – herd immunity would have developed for a relatively low infected fraction and consequent mortality. But then it seemed as though R0 was much higher, with a much higher peak of infections and a CFR significantly higher than flu, leading to the imposition of lockdown. In contrast, Sweden seems to still believe that they’ve kept R0 at just over 1.

In a later post I’ll cover some misconceptions that have arisen concerning how lockdown and its removal might affect the spread of C-19.

Update: Housekeeping note from Hector: I have stopped the header menu being ‘sticky’ to prevent the issues with it some people were having.