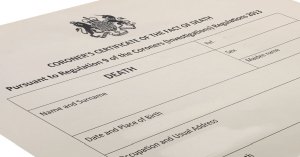 This is an article by journalist Ronan Maher. His Twitter page is www.twitter.com/MaherRonan

Practically everybody knows, if only indirectly, about the Coronavirus Act (2020), which royally ascended on March the 25th, 2020 and confines us in our homes ever since (save for an hour for exercise a day). Far fewer people realise that it contained two clauses which liberalised the rules for doctors recording deaths and certifying cremations.

The NHS sent guidelines following the changes to medical experts, coroners and undertakers at the end of March, and the various departments they touched (the Ministry of Justice, etc.) quietly updated their websites.

I had a doctor go through them with me, line by line. Afterwards, I sat back, dumbfounded.

It sounded like lawmakers had paved the path for murderous and negligent people, and risked denying a person his or her right to a duty of care in death, by which I mean the dignity of having its cause recorded as accurately as possible.

It appeared to have also put an ominous cloud of doubt over the veracity of the Covid-19 death-toll, undermining assumptions about the lethality of the disease and any subsequent investigations into how the state dealt with the SARS-Covid-19 outbreak.

* Ministers suspended a safeguard which has endured for 118 years and contributed to the arrest of doctor-serial killer Harold Shipman: requiring a senior independent doctor to corroborate cremation applications.

* Also suspended is a safeguard put in place after Shipman’s conviction: allowing relatives to inspect Medical Certificates of Cause of Death (MCCDs) and cremation applications.

* Now, if the attending doctor (the one that saw the patient in his or her final illness) is unavailable, any registered doctor (eg. retired doctors who have returned to work, first-years, students fast-tracked to the ‘frontline’) can complete an MCCD, even if that doctor never saw the patient before their death.

* Ministers extended the time in which a doctor should see a patient before that doctor or another registers that patient’s death from 14 to 28 days.

* Now, if no doctor sees a patient within 28 days before death, any registered doctor can certify their death, as long as “they can state the cause of death to the best of their knowledge and belief” and the coroner agrees, an agreement the doctor could make with a phone call. Normally, if a doctor did not see the patient within the allotted time, they send the deceased to the coroner. (Note that coroners are in short supply and also under increased pressure.)

I scanned the news.

On March the 15th, Harry Cole of the Mail on Sunday reported that the government planned to relax rules around ‘death management’, but this story only provided a brief summary of some of the changes.

On April the 6th, GP Online published an article behind a paywall summarising the guidelines as they apply to GPs.

Besides these, all I could find were passing mentions in stories about the Act as a whole. No proper focus on the clauses and what they mean. And no warning bells ringing. It seemed clear to me, and to the doctor who helped translate the medicalise into plain English, that other reporters, columnists, historians, doctors, politicians, researchers, the public at large, and many others, should know what the government had done. So I pitched my story to editors at three national newspapers.

One of them said it was too technical for their readers. The second said that it was the wrong time for such a story. The third said that for them to run with it, I would need to find consequences because of the changes which I could show and prove.

In hindsight, I failed to make it clear in my pitch just what the government had done and why it mattered. They put these rules and safeguards in place to protect vulnerable people and to ensure that data taken from death records, to do things like shape health policy, are as accurate as possible.

Here are some problems:

* The changes risk putting a considerable distance between the person drawing the conclusions and the events themselves, increasing the chances of mistakes and making it likely that patient records will be vague.

* More mistakes and vaguer records are likely to compromise the accuracy of death data gathered on a wider scale, which may be avidly reported to a frightened public.

* The changes (and the demand to do things quicker) create the potential opportunity for medical malpractice; people might attempt to get away with things that they would not have otherwise.

* It would be far harder to catch Shipman if the Coronavirus Act was law when he was murdering his patients.

I am not implying anything sinister here. The government made the changes under pressure to stop doctors from being snowed under with paperwork for the pyramids of bodies Professor Ferguson of Imperial College said to expect, and to ensure they were free to prioritise clinical duties. They also wanted to avoid delays to funerals and the horrific spectacle of the morgues overflowing.

But Professor Ferguson’s models were wrong.

The NHS did not need the Nightingales. SARS-Covid-19 did not overwhelm our health service. And doctors now have plenty of time to perform their normal statutory duties.

So can we have wise legislation reinstated please?

28 thoughts on “Ronan Maher: Clauses in the Coronavirus Act changed how we record deaths. It’s time to change them back. ”