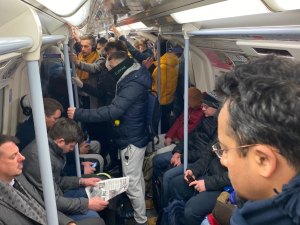 This is an article by Andrew Carey, addicted gambler and unemployed tree feller.

When the virus that was to be named Covid-19 erupted in Wuhan I noted that the city had a Metro system. When this virus arrived in the UK, London hardest at first, I thought the Underground system must be a factor in its rapid spread with its crowded trains, surfaces that get touched and generally sharing of the same air.

Then I wondered: the London Underground doesn’t penetrate south of the River Thames very far. That’s mainly, although not exclusively, the territory of overground trains. So it should be easy to find a link between Underground travel and the CV-19 virus being shared.

But before I go on I should mention US physicist and Nobel Laureate Richard Feynman. I’ve long admired and enjoyed the his books. In his down-to-earth autobiographies he praised the guy who did many boring experiments on learning in rats only to learn nothing about rats apart from all the environmental cues you have to eliminate and things you have to control for before you can do an experiment on rat intelligence. He also said that you should declare your expectations from any experiment before you do it.

So let me declare a bias. I hate the London Underground. It’s hot, dull and claustrophobic, and when I commuted on it twenty five years ago never saw it as a liberating force that allows people to cooperate more quickly than the alternatives and thus make more wealth so people are more free to do with their lives what they wish.

Anyway, I looked a little further into the matter.

For the data on stations which are part of the Underground which are actually underground, as in being part of the tunnelled network, this source was used:

The data on local authorities cases per 100k of population is generally available on the BBC, Sky news and other sources. I broke the data down into Local Authorities that had none, one and two or more underground stations which are actually below ground and produced this table: 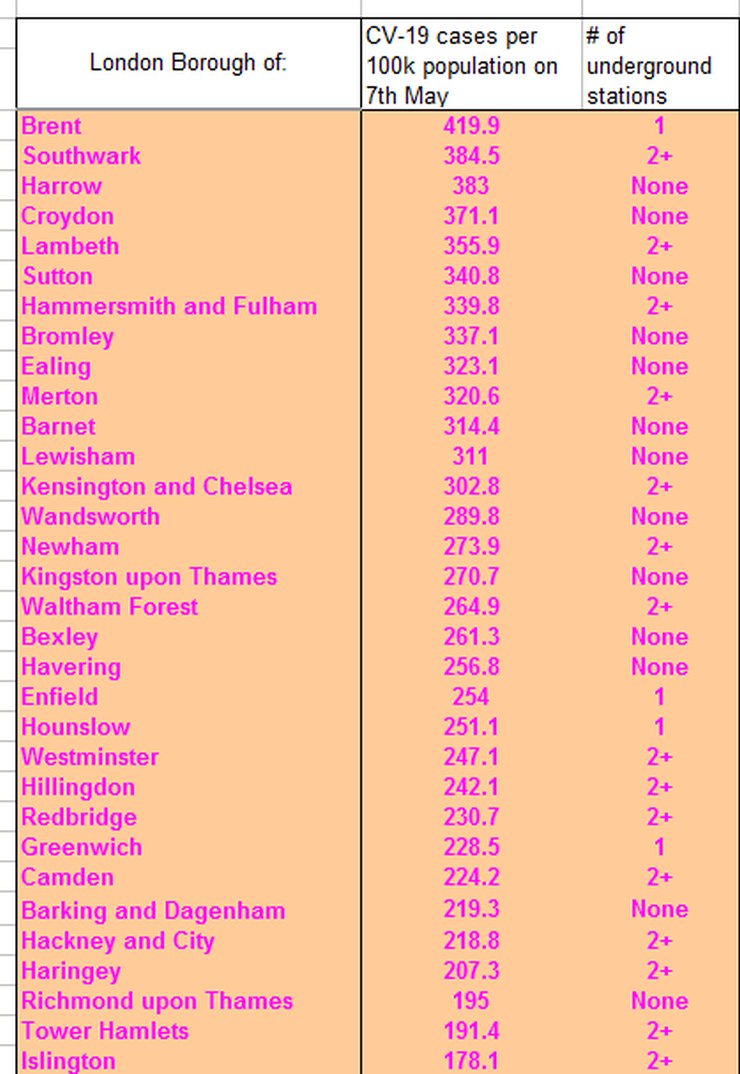 There may be an error in there. And any data may only be a proxy for what actually goes on – if you commute from Camden to Westminster you may pass through two underground stations. If you’re travelling from Harrow to Central London for work you likely have one egress or entry which is actually underground on each leg of your trip.

That said, the results are not what I expected, as there appears to be no positive correlation between travelling underground and the local authorities worst affected.

There was an excellent piece by Jonathan Kay on Quillette which mentioned that no transport hubs were the locations of super spreader events.

So we have some evidence that the London Underground can go back to business as usual as long as the passengers treat each other with respect. Sure, there will be transmissions of this virus that occurs on the network, but it is not a high-risk environment for transmission of this beastly thing.

13 thoughts on “Andrew Carey: Covid and the underground”