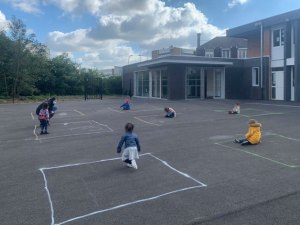 This is an article by Nic Elliott. Nic is the host of the Sounding Board podcast. His Twitter account is @MrNicElliott.

Teachers are being told by their unions they can legally refuse to return to work, says the Guardian.

The Times is confusing infection with illness on its front page, in a deliberate attempt to scaremonger parents: 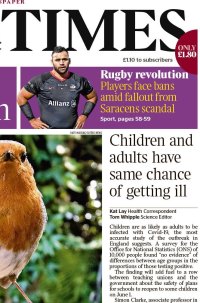 I am a parent.

I am also a key worker (replace key with essential, critical, or whatever word the government decides today), yet after our local school begged us, my wife and I changed our working arrangements so that we could both still work, and still look after the children ourselves, sparing the school of the responsibility.

I have always supported our primary school. Our children have flourished. Even during the school closure, we have been supplied with daily teaching materials, engaging videos, phone calls to the children, and regular communication from the senior teaching staff. There are other schools in our local area that have just gone dark on students and their parents. I feel greatly for those kids, and for those trying to keep them entertained and educated.

But now that the PM has announced that schools should get ready for an intake of three of the seven standard primary school years, I am not confident at all about sending our children back.

Am I afraid of the coronavirus? Not one bit. My wife and I are under forty-five, and my children, are, well… children. Despite what the Times say in their headline, all the evidence and statistics say my children will be fine, and so will we.

Of course, I understand the school will have staffing issues surrounding those that are clinically vulnerable and in the high-risk groups. But right now, schools are being asked to prepare for an intake of three years, not seven, and to halve the class sizes.

Yes, it is more complicated than that, there are still the children of key workers to consider, which have also just been encouraged to go in en masse. Groups of fifteen children are to be kept apart from other groups where possible in the school, and things like breaks, lunches and start/finish times are to be staggered.

Ignoring the evidence in general that we should just reopen the schools entirely, the new government guidance on schools isn’t overly onerous. In fact, it states very clearly that primary age children are NOT expected to stay two metres apart from each other and that this has been taken into account. Yet teaching unions and local authorities have grabbed the two metre social distancing rules (which are not even underpinned in the law) and are going much, much further.

After a half hour conversation yesterday with our head teacher (something I have never even contemplated before), I learned that it wasn’t the government guidance, but risk assessment criteria from teaching unions and the local authority that were forcing the school into this incredibly difficult position.

Four metres squared per pupil in a class setting? Seriously? Classrooms can be different sizes, depending on the space standards of when they were built. The comprehensive government guidance is clear that classes should have up to fifteen in a group, with one or two teaching staff regardless of room size. If there are desks, they are to be spread out as far as possible, but not two metres at all costs.

Yet the local authority and unions are ignoring this balanced advice from the government and their scientific advisors, and imposing crazy limits on schools, that effectively mean they cannot operate.

My conversation with the head teacher was constructive, professional, and detailed. We talked of the myriad conflicting aims and priorities, and how to possibly satisfy them all.

I think he has been dealt a near impossible hand and is doing the best he can in the situation – certainly with parents like me, butting in to have our two pence worth.

But this is what I fear. My daughter is five and has already missed out on months of development in Foundation Stage (what we used to call Reception). Like most her age, she thrives on interaction with her peers and teachers and on the noise and the hustle and bustle of school. I don’t want her being taught that keeping away from her peers, and not sharing toys is normal, or desirable. I don’t want her missing out on sitting together on the carpet for a story, or for phonics and maths.

The damage to mental wellbeing may indeed be permanent at that age. Is that what we want for the next generation? Children afraid of going near each other for fear of being disciplined. Missing out on true group activities and bonding experiences – social and cognitive development vital at this age.

As the government’s chief scientific advisor and chief medical officer meet with unions today, I may yet send my daughter in, if and when the school opens its doors in the coming weeks.

But if I don’t, it won’t be because I am scared of Covid-19. It will be because the teaching environment created by zealous unions and over-protective local authorities will itself be harmful to her health.

20 thoughts on “Nic Elliott: If I don’t send my children back to school, it won’t be because of the coronavirus”