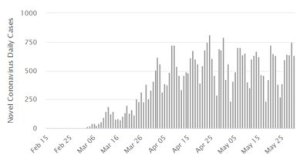 A few weeks ago, I created an age-dependent mortality model.This was a top-down approach, trying to make a predictive model that honoured various observations and data, and I have updated and fine-tuned it as more information has become available. The model has remained robust and has recently been validated by an analysis of the recent Spanish serological study from which age-dependent mortalities were calculated, leading to very similar numbers.

I now want to build in the additional observation that amongst most populations, regardless of any measures in place, the infections stop growing exponentially once a certain level of infection has been reached. Infection cases always appear to plateau at or before ~ 25% of infection levels within the population. The question I am posing is: why does this happen?

It is also clear that children do not fall ill from the virus, and even if they are infected the disease is almost always asymptomatic. My previous post postulated that the reason that African countries do not have a Covid-19 problem is because the large percentage of children in their populations create a form of automatic herd immunity. My limited understanding of the biomedical sciences (mainly gained from my daughter who is a 3rd year student at Newcastle University) is that, while the immune response to the infection is not yet fully understood, it is clearly more effective in children and declines with age. It stands to reason that this resistance, whatever the cause, does not suddenly stop at a certain age, but will decline is some natural fashion. As is the way with most natural phenomena.

With these two observations, I have put together a model that postulates that this body of resistant people contributes to the overall infection population such that herd immunity is effectively reached when ~ 25% of infection levels have occurred, which would then explain why cases of new infection plateau, instead of continuing to rise. The graphs below outline the theory and the results. 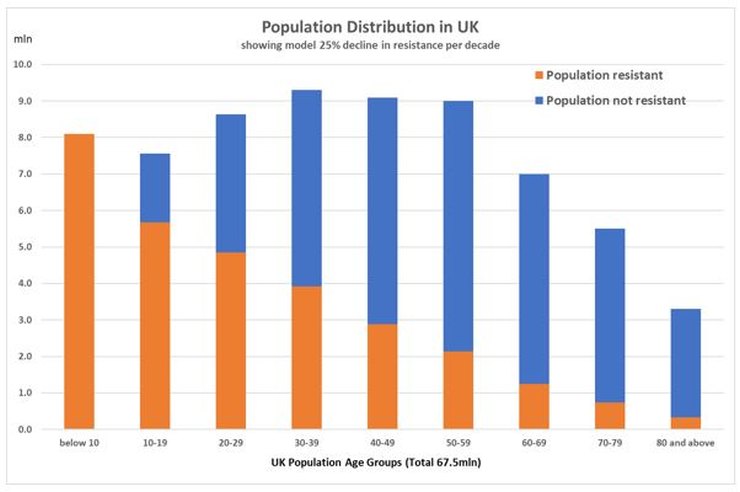 The key decline rate per decade of resistant individuals is determined by calculating what would be required to get an overall resistant population to 40 million (which is equivalent to the quoted ‘herd immunity 60% threshold) with an infection rate of the susceptible population of about 25%, which is the maximum that has been observed in any population. It turns out that the decline rate per decade which meets these criteria is also 25%.

Using the output from this simple resistant/susceptible model, I then apply the previously calculated mortality model to the resistant population only and compare the output with the actual deaths in each age group, as below. 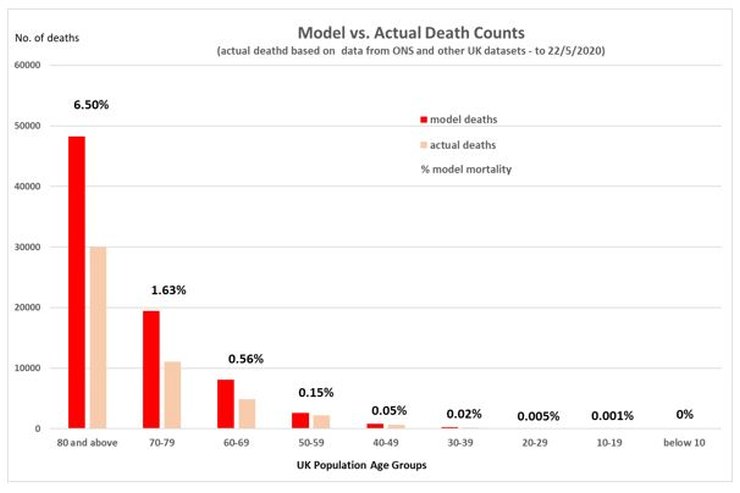 The idea of large segments of the population being differentially susceptible is currently being discussed by others. Whilst the cause for this is unclear, and multiple reasons are being discussed (eg. Vitamin D, genetic variations, previous exposure to coronaviruses, variable innate immunity, etc.), it is also unclear if such resistance just prevents symptoms or prevents the infection itself. Also, whether antibodies are produced or not, which might explain why the pandemic dies away even though less than 10% of a given population appear to have been infected, as is the case in the recent Spanish study.

I have no idea if this mathematical approach accurately reflects what is happening in the real world. And we won’t until the mechanism for any natural resistance is understood. But it demonstrates that the data we currently have cannot be fully squared by just assuming that everyone in the population can become infected, as was the assumption with the Imperial model. And if there is a large portion of the population which is naturally resistant, it means we have seriously overestimated the potential number of deaths and the overall average mortality. It also means the epidemic in the UK may be finished.