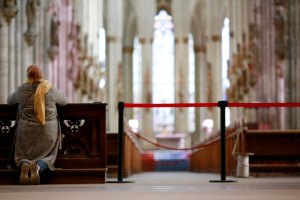 This is an article by Chris Larkin.

Public health must not, and cannot, become an alibi for infringing on the rights of millions of people around the world, let alone for depriving the civil authority of its duty to act wisely for the common good.

Many authoritative voices in the world of science and medicine confirm that the media’s alarmism about Covid-19 appears to be absolutely unjustified.

The State has no right to interfere, for any reason whatsoever, in the sovereignty of the Church.

May the Blessed Virgin, Help of Christians, crush the head of the ancient Serpent and defeat the plans of the children of darkness.

Those are four extracts from ‘an Appeal for the Church and the World’; a resounding, unequivocal statement in response to the crisis, a ‘truth to set us free’ signed by three cardinals of the Catholic Church; Joseph Zen Ze-kiun of Hong Kong and Janis Pujats of Riga, both personally familiar with the insidious ways of authoritarian regimes, together with Gerhard Müller of Mainz, another well-known Vatican figure. There was to have been a fourth and even more prominent signatory, Cardinal Sarah, but he backed out, citing an incompatibility with his position, while making no secret of his support for the sentiments expressed.

This was encouraging, but when it comes to political views, one cannot refer to ‘the’ Church any more than one can talk of ‘the’ science.

For the first time since the punitive papal interdict in the reign of King John, all sacramental activity in England ceased in late March 2020. The leadership of the Church in England and Wales ignored the world cardinals’ appeal while making little distinctive contribution themselves to the public discourse (it cannot be called a debate) and has been content to act as a conduit for government safety information. ‘We must all whole-heartedly follow; that is the right thing to do,’ declared Cardinal Vincent Nichols in his video address. ‘We’re not looking for ways round this provision. We’re going to play our full part in it. That was the call of St Paul, that we are to be good citizens.’ St Paul, in Romans 13, wasn’t of course envisaging a world in which Christians would be forbidden to congregate.

Behind the Church’s anodyne facade lies an awkward reality: on this occasion the interdict came not from Rome or the UK government but by order of the English bishops themselves. Damien Thompson of the Spectator revealed that it was the Church’s own appointed scientific adviser, Prof Jim McManus, who alerted the civil service to the danger of infection and urged the government to recommend the complete closure of churches even for private prayer, something the government’s own instincts had led it to resist. This recommendation was then sealed by the bishops’ order to close completely (an equivalent order in Italy was struck down by Pope Francis) while warnings were issued against priestly sacrifice of the kind made in the pandemics of the past, which had stood as such a strong sign of the Church’s unique ministry. Clergy would therefore have to break their vows of obedience, not just secular law, if they were to use their initiative in ministering directly to the sick and needy.

It fell to Justin Webb of the Today programme to ask the burning question of Cardinal Vincent Nichols on 14th May: ‘is it right that you can go to a garden centre or to the council tip, but not to Church?’ ‘There’s a big, big feeling in the religious communities, of wanting to get back to a fuller practice of their faith,’ came Vincent Nichols’ reply. He then neatly evaded the danger of any cut-through: ‘they would like to re-open as long as we can do it safely.’ Politically, this was a eunuch’s cry, ensuring that the keys to our churches remain firmly in the clenched fist of the Johnson government.

There is some history behind the evasiveness of the English and Welsh Archbishops’ response. Since the Relief Act of 1829 lifted the legal sanctions on the faith, the policy of Catholics has been to keep their heads down, and there was plenty of discrimination to justify that. Without descending into the tedium of Church politics, in more recent years there has also been, some felt, an imposition of a new translation of the Mass and a reassertion of the liturgical authority of non-English speaking Rome. As a result of all this, what has risen to the top of the Church in England is a well-honed team of conflict-avoidance specialists. Serpent-crushing is not the sort of thing they get into.

Cardinal Vincent Nichols is a kindly man with an authentic Christian gentleness about him who has given pastoral consolation by video to Catholics deprived of the sacraments. Politically, he kneels at the altar of the NHS, a funding mechanism that entrenches excellent care for the rich, who don’t much use it, leaving everyone else to pick over the remaining curate’s egg of state health provision. On economics he is something like a follower of Bob Geldof, unaware of the inconvenient truth that in the last twenty years it is the expansion of the liberty to trade that has lifted hundreds of millions out of poverty, far more than has Western charity. ‘If anyone is not willing to work, neither should he eat’ is the other call that St Paul makes on the Christian conscience.

122 million Indians lost their jobs in April due to the lockdown measures. Charity begins at home, but where is the charity here when cancer and heart patients are left untreated, the elderly die uncared for in nursing homes, when there are no last rites for the dying, and when the poorest non-internet users have no access to church at all? A complacent and sentimental British public worry about schools reopening when mortality from the virus for the under twenties is statistically a risk so low it can hardly be measured. Modern primary school children in England, according to Professor Spiegelhalter of Cambridge University, are the safest human beings ever to have walked the earth.

The Apostles’ Creed states that Christ “suffered under Pontius Pilate, was crucified died, and was buried. He descended into hell; on the third day He rose again from the dead. He ascended into Heaven.” There may be a safety message hidden in that, but I struggle to see it. Had there been an adequate risk assessment, it would never have happened.

Christianity is a victim of its own success, but did the Church’s response have to be managerial, so scrubbed clean of personality, so lacking in distinction? In the matter of conscience, was there anyone at home? Where was the mention of our teaching on death in the bishops’ public response? That the ultimate aim of life is death avoidance is not a Christian belief. Our enthusiasm for ‘safety’ exposes a gap in modern Church thinking on eternal life. We feel distant from it. For the first time in history, many live for decades with no experience even of bereavement, paradoxically as a result of hundreds of years of Christian charity in universities and hospitals. Well-heeled churches in England are attended by people who know how to look after themselves and live for an awfully long time by historical standards, far from the 30 million children the World Bank fears will be thrown back into poverty by the global over-reaction to a novel respiratory disease, a serious risk principally to the elderly and the already infirm.

‘Safety’, a public concept that has grown distended and corrupt because it cannot be outbid by other considerations, including even liberty, and is being used for the unaccountable ends of leaders who insist upon it, as it was before under the French revolutionary ‘Committee of Public Safety.’ Fewer now remember that state imposition of material equality was another such unquestionable good until the humanitarian crimes and economic disasters of communism were exposed. Some Catholics in Latin America espoused communism, but it was a bitterly contested issue, a battle of consciences. Pope Francis is an excellent witness to the forgotten suffering in the world, but his emphasis on the poor contains the danger of a lack of distinction from secular politics, where political revolutions tend to be middle-class affairs in which the poor are invoked but not consulted.

At a parish level the Church is peopled by the risk-avoiding classes. There’s a dearth of young men and a gravitational mass of people who are loyal and want to be told what to do. Sometimes that obedience comes from genuine humility, at other times it can seem inert, even bovine. Those of us who like to stir it up a bit with difficult questions encounter not hostility but incomprehension. Paradoxically, only a post-Reformation Catholic would think it dangerous to ask questions of the Church’s decision-making; a conscience; that’s what Protestants have, isn’t it? Few in the parishes seem even to have heard the other side of this lockdown question. The dominant talk on Zoom is of the ‘new normal’ and the joys of clean air and quiet gardens. Of an elderly lady who was forced to die alone, it was said she would have preferred it that way, not causing any trouble.

The start of the pandemic was difficult and chaotic. Hard as it is to admit now, big decisions were made with fear as the main driving force, and those were never going to be good decisions. Despite the basic scriptural injunction ‘be not afraid’, over the centuries the Church has gradually downplayed fear as one of her original nine deadly vices. In the political world, only the Prime Minister of Norway has so far admitted that their government succumbed to it.

The Church could be teaching us as Cardinal Newman did that Creation itself is flawed. They could teach us history and perspective. Amid the lack of a distinctive response from the Church, the lockdown will kill and blight the lives of many, especially in poorer parts of the world, with the aim of preventing lives in affluent countries being shortened somewhat. At least three (and a half) brave cardinals understand that and have spoken out, but the Church in England isn’t listening.

9 thoughts on “Chris Larkin: Safety is No Salvation: A Catholic Perspective on the Covid-19 Crisis”