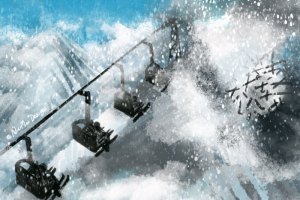 This is an article by Rory Hamilton. Rory is a ship’s pilot and the dad of four teenagers. He has spent the lockdown in close contact with different captains and crews from all over the world. He is a big lockdown sceptic and has had no truck for this incoherent, illogical, authoritarian and cowardly government capitulation to public opinion. He is worried how the woke narrative of the culture war has been portrayed on social media while the schools have been shut.

The clear blue skies above the ski slopes of Northern Italy — Courmayeur Mont Blanc to be exact — in the first week of February gave little indication of being a proverbial calm before a storm. Although my disinclination to wear a ski helmet may have elicited a disapproving frown, there were no face masks in sight. The cloud of a dystopian summer, where masked pub staff serve beer in plastic cups from outside collection points to punters using shrubs for toilets, seemed far beyond any plausible slippery slope.

Yet here we are. Our most basic freedoms have been trammelled. Our rights have been quashed. Children’s education has been suspended. We are compelled to do more and more ridiculous things in our great national game of ‘Let’s pretend that there’s rampant Ebola outside’. It’s like when you were a child and you used to pretend the separations of paving slabs were deadly crevasses. You had to navigate an entire pavement without treading on one to avoid certain death. An occasional childhood game of fantasy has been replaced by the bizarre and ubiquitous spectacle of ‘social distancing’ — or some virtuous attempt to do it. Never mind that millions of people will soon be unemployed, we can’t ruin the great new game of ‘Let’s pretend’.

It is vital that we all keep playing this game. We must, for if we do not, we may question why the Government deprived us of our liberty and changed life as we know it when such drastic actions were wholly disproportionate to the threat that we faced. The media have been complicit in encouraging the mass participation in our new national game. Dissenters have been marginalised and labelled murderers. Questioning of Government policy comes in the form of banal Soviet style controlled opposition where implementation queries are tolerated but not criticism of the actual ‘Lockdown’ policy itself.

The Government and their media enablers have created a textbook ‘moral panic’ — but on steroids. The concept has morphed from the disapproval of mods and rockers in the 60s and 70s to the stasi-esque culture of ratting on neighbours for ‘breaking rules’ and public shaming of transgressors that defines this new authoritarian version. Amidst the confusion of moral panic opportunities abound; Naomi Klein used the concept of the ‘Shock Doctrine’ to argue how neo-Conservatives used crises to smuggle in policy changes that advanced the cause of their ideology. It is at times like these that the ‘Overton window’ — what is acceptable public discourse — is said to shift. But this time it is the neo-Marxists who are making their move. In the chaos of an unprecedented Government intrusion into our private lives, the purveyors of contemporary identity politics are seizing their moment.

It is difficult to state precisely when this divisive new strain of identity politics first emerged but it has been visibly on the march over the last decade and seems to have been accelerating since around 2015. This neo-Marxist ideology — like the original dichotomy between the proletariat and the bourgeoisie — elevates group identity above that of the individual and then uses ‘intersectionality’ to devise a hierarchy of oppression among various groups and sub groups. This hierarchy then shows how power is unfairly distributed among the various groups or intersectional sub groups. One obvious problem here is that the myriad of group identities arising from intersectionality is pretty well infinite. We have race, ethnicity, gender, sexual orientation, religion, disability, culture, and social class as obvious categories. Even among these you could spend days trying to figure out the ways that they could combine or intersect; Then how about intelligence, attractiveness, agreeableness, popularity, sporting prowess, and social status? To say that intersectionality is a political minefield would be putting it mildly.

Notwithstanding this complexity, we can make some basic observations. One might be that the prevailing western narrative clearly places black racial identity above white racial identity in the hierarchy of oppressed groups. The brutal murder of George Floyd encapsulated this narrative through a heinous crime being seen by millions throughout the world. Here was an unarmed member of the black minority (13%) in the USA being murdered by an agent of the state belonging to the white majority (72%). The charge that this showed the police were racist rather than an isolated crime of a rogue cop is extremely serious.

The charge of racist police forces in the USA was addressed by Heather MacDonald in the Wall Street Journal shortly after the crime was committed . However, neo-Marxist ideology posits that individual interpretation is sacrosanct. Subjective feeling trumps objective evidence; who shouts loudest or who has the biggest social media platform prevails. So the widespread police brutality against the gilet jaunes passess relatively unnoticed by UK media outlets and social media but the murder of George Floyd captures the zeitgeist of a burgeoning social justice movement. UK teenagers in thrall to a new cause have taken to the streets to protest in their thousands. The protests provide the backdrop to the collective act which shows solidarity to the cause: taking the knee.

Acts of adherence to a cause, religion or authority have been part of cultures or movements for millennia. The Orwellian image of saluting big brother has been part of the dystopian image of authoritarian regimes in the age of liberal democracy. We have seen new acts ushered in to check on the obedience of the population. The weekly clap for the NHS may have been an innocent ‘thank you’ for some; but for others it appeared dangerously close to cultish ‘group-think’ — elevating an institution of the state to quasi-religious status. Likewise, taking the knee could be seen as an act of solidarity to show outrage against an abhorrent crime, but it doesn’t take a kangaroo leap to see it as an act of acceptance to the strictures of identity politics.

The age of ‘Lockdown’ has emboldened the government to go further than any of its predecessors have done for centuries in eroding our fundamental rights and freedoms. It seems that compulsory mask wearing is not much further down the slippery slope, which will mean no place to hide for dissenters. If the penchant for authoritarianism is not quickly arrested then the neo-Marxists will have a historic opportunity to clamp down on the free speech that acts as a bulwark to their collectivist inclinations. The disapproving scowl for not wearing a ski helmet may soon be a longing memory for the relative freedom and tolerance of a bygone age.

21 thoughts on “Rory Hamilton: A Perfect Storm for the ‘Woke’ Revolution”