This is an article by Christopher Bowyer, who has produced many graphs for HD Magazine.

Having produced graphs of the NHS England Covid-19 deaths statistics for the past month or so, I thought I would have a go at analysing the https://coronavirus.data.gov.uk lab-confirmed Covid-19 cases data.

Before I go any further, please bear in mind that the number of positive cases depends on the number of tests done each day (which has increased over time), and whether only hospital patients are being tested or anyone who feels unwell.  So just because the England Covid-19 positive tests peak on the 7th April, it doesn’t mean that was the peak of the epidemic.

Now onto the graphs.

Firstly, here is the graph of daily Covid-19 positive tests (by specimen date), for England, with a 7-day average trendline (the thick line).  The data shown in the grey area may increase, as it takes a few days for all the test results to come in, especially over weekends.

(Bigger versions of all graphs available at end of article.)

From this, it can be seen that the daily Covid-19 cases have been falling steadily since early April, although the rate of decrease has slowed since early May.  It is also apparent when the weekends/bank holidays are!

The next graph is similar, but shows the 7-day average positive tests (by specimen date) for each of the English regions.  I had to remove the daily tests data, as it made the graph too complicated. As before, the data shown in the grey area may increase.

The difference in the shape of the region curves, are quite striking, with London and the North West rising rapidly to a peak and then declining, while the other regions rise more slowly, plateau and then gradually decline.  Unfortunately I don’t know how much of this is to do with how much testing was done in each region, and how much is down to the outbreaks following different patterns.

Below are two graphs of this R7d ratio for all English regions, firstly an overview from 29th March onwards, and then a close-up of the R7d ratio from 12th April onwards, when it is in the range between zero and 1.2, to show the fluctuations more clearly.  As on the previous graphs, the data in the grey areas may increase.

Looking at the 7-day average positive test values for the Sundays, as shown in the table below, gives more information on how the R7d ratio value got above 1. 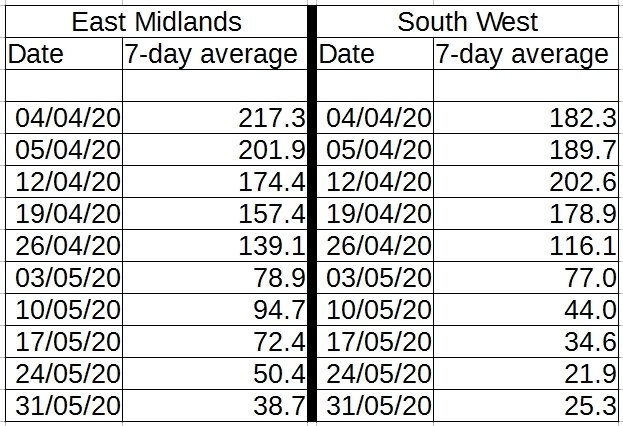 For the South West, the pattern is incomplete, but similar – a sharp fall from 34.6 on 17th May to 21.9 on 24th May, followed by a small rise to 25.3 on 31st May.  This is only an average of 3.4 extra people a day testing positive than the previous week, and the 31st May figures are still 27% lower than those from 17th May, so nothing to get worried over, it appears to be just a blip as it was for the East Midlands.  Naturally though the government are currently considering tightening the lockdown in the South West 🙁

I hope you have found this article interesting, please let me know any suggestions you have in the comments.

Update: After submitting this article to Hector, I got thinking about the R7d ratio, and how it is over-sensitive to weekly fluctuations.  So I thought I would also calculate the R14d ratio, this is the ratio between each day’s 14-day average positive tests, and the 14-day average from 14 days previously.

Below is the graph of the R14d ratio, for all English regions.

From the graph, it can be seen that the R14d ratio has been below 1 since 26th April, and even the peaks for East Midlands & South West on the R7d graph are still below 0.8 on this R14d graph.  By comparing average positive tests with the average from 14 days previously, instead of with the previous week’s average, the R14d ratio gives a much better long-term picture of the course of the epidemic than the R7d ratio does. 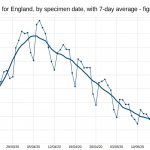 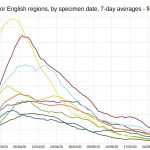 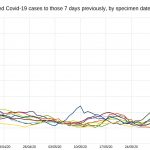 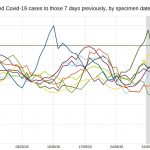 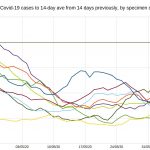