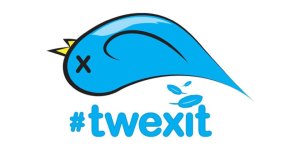 Big day on social media today (ie. Saturday), which partly explains why I’ve got a bit behind here. Virtually overnight there was a massive grassroots push for all conservatives and libertarians and non-leftists to leave Twitter and move to a new free speech platform called Parler. The result was hundreds of prominent personalities who decided today to move there. Unlike Gab, it’s not a ghost town, thousands of ordinary people are signing up and following the big names. #Twexit has become the latest thing.

For those of you who are sensible enough to stay away from social media, this is not a reason for you to start. Social media will still be a cesspit. But at least for now, if Parler really does take off, there will no longer be the threat of bans for those who don’t toe the line. And shadowbanning will no longer be a thing.

There are still dirty tricks that can be played, of course. For example, the other day Visa announced that it would no longer process payments for Gab. And Gab has long been banned as an app on Apple and Android. Parler hasn’t, and if it becomes enormous quickly then it will be more difficult for these dirty tricks to be played. And of course people might drift back to Twitter if its massive userbase starts to seem attractive again.

Nevertheless  I will enjoy this moment of optimism while it lasts.

Update: Parler has a few problems. Doesn’t look good, functionality a bit iffy. Not sure it’s going to fly.