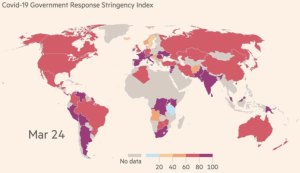 This is an article by Tim James. Tim manages legal liabilities arising from industrial disease cases.  All opinions expressed are strictly his own.

In the ongoing debate over the merits of the United Kingdom’s various lockdown measures the focus has understandably been upon comparing the number of lives the lockdown has allegedly saved with the price that society and individuals have paid in return. It has been viewed in terms of a cost benefit analysis.

However, there are more fundamental issues at stake which are frequently overlooked when making these comparisons: The ethics, morality and legality of the government’s actions should always be paramount.

It is often claimed by lockdown supporters that those who oppose it are more interested in money than lives because the latter are seeking to protect the abstract and nebulous entity known as the economy which, apparently, has very little to do with the lives of lockdown enthusiasts.

While the economy is, of course, the life support system upon which everyone depends, lockdown sceptics quite rightly point out that the real argument is not one of lives versus money but lives versus lives given that the lockdown appears to have caused thousands of deaths already and sadly looks likely to cost tens of thousands more in the future in addition to a reduced quality of life.

The efficacy of lockdowns has been endlessly debated and I will not revisit the arguments here. The assumed benefits of are, at best, unproven. Despite this it seems that faith in their effectiveness is deeply ingrained in many otherwise educated people who actively refuse to consider any evidence to the contrary.

The enormous economic and human cost of the lockdown should have been obvious to the government from the start. A highly complex and interconnected modern economy cannot just be switched off and switched back on again without great cost to society. It appears that the effects were significantly underestimated.

Even if lockdowns were proven to be effective and their costs far lower that would not in itself provide ethical justification for their use: The ends do not automatically justify the means. Early into the lockdown the Nuffield Council on Bioethics expressed its concern over the government’s narrow focus in this matter.

A fundamental point seems to have been ignored by the majority: When counting deaths from or with Covid 19 against those caused directly or indirectly by lockdown we are not comparing like with like.

Deaths from Covid 19 are deaths from natural causes, wherever you believe the virus originated. The Government does not have a responsibility to prevent these at any cost, despite their repeated pledges to do “whatever it takes” to beat the virus.

It is unethical and arguably unlawful for a government to take such drastic measures in the uncertain hope of saving some lives when the cost of doing so will almost inevitably cost many other healthy lives both short term, as we have already seen from the huge increase in non-Covid 19 deaths since April, but also long term as a result of severe economic depression, poverty, violence, suicide, worse healthcare and so forth. Those deaths might not be immediate but many shall undoubtedly result from the government’s extreme measures.

To take a hypothetical example, if the government discovered that, by some magical process, for every random person it shot dead on the street two critically ill Covid 19 patients would miraculously recover. It would be saving lives on aggregate but who could argue that this was ethical or moral? Unfortunately the ultimate ratio of lockdown deaths to Covid 19 deaths looks likely to be far less favorable.

To take a more realistic example, it is analogous to an ambulance driver driving at speed down a crowded pavement in the hope that he might save his patient by getting him to hospital quicker. Any pedestrians killed by his actions would have been killed unethically and unlawfully however good the driver’s intentions might have been.

What the government is doing is undoubtedly more extreme and reckless than both the above scenarios given the lack of evidence for the effectiveness of lockdowns. It is just that the deaths they are causing are a little less obvious and immediate but that makes them no less real or the government any less morally culpable.

Much of the legislation pertaining to coronavirus has been created by way of statutory instrument, effectively by government fiat, not scrutinized by Parliament. When imposing laws this way the proportionality of the measures is a vital consideration.

This point, amongst others, is crucial to the forthcoming judicial review being brought by Simon Dolan against the Health and Education secretaries in that it demonstrates that the government’s decisions have been both perverse and disproportionate.

His barrister Francis Hoar published an excellent article in April explaining why the government’s legislation is unlawful both in the manner that it was made but also in its effects under the European Convention on Human Rights.

In a world of finite resources it is inevitable that governments and public bodies should have to make difficult and often unpopular decisions which will ultimately affect lives and life expectancies. That is especially so with a health service free at the point of provision and is why PHE applies the concept of the Quality Adjusted Life Year (QALY) in deciding which treatments are affordable. How is this any different?

The distinction is that the government is not simply managing resources to try to achieve an optimal outcome: It is depriving the whole population of its inalienable and fundamental freedoms in such a way that it bears moral responsibility for the devastating consequences of that deprivation.

Simply making a utilitarian comparison of lives lost to Covid 19 with lives lost to the lockdown and its aftermath is to miss the point. That would be to imbue the government with managerial rights over our very mortal existence: To accept that those who are in no immediate danger from natural causes must, nevertheless, be sacrificed for the greater good, or the lesser good or for no proven good whatsoever.

It is, in effect, playing God. By what authority?

13 thoughts on “Tim James: A Perspective on the Ethics of Lockdowns”