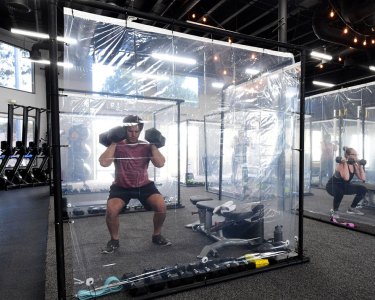 An article by Sarah Ingham, who tweets at @inghamsarahj. Sarah launched the Gym-Goers’ Covid-19 Survey.

On a spectrum of illness that runs from a mild cold to the Black Death, many continue to put Covid-19 at the fatal end of the range.

This is unsurprising. The initial, indelible images of the illness would not have been out of place in a disaster movie. People apparently lying dead in the eerily empty streets of Wuhan; the intubated patients in Italian intensive care units reminiscent of autopsy scenes; teams in hazmat suits. Speculation that this particular coronavirus may have been cooked up in a biological warfare lab added to the apocalyptic nature of the threat.

With the Steven Soderberg film Contagion suddenly more like fact than fiction, many didn’t wait for the Government officially to order the Lockdown on 23 March. By the second week of March they were already shielding themselves and their families: children were pulled out of school; essentials were stockpiled, events cancelled.

The government might have been following the science, but the great British public followed its gut instinct and staying at home. It looked wise in the light of the prediction of 500,000 deaths, which it later transpired, was instrumental in locking down the country.

Death at Teatime sounds like a cosy Agatha Christie mystery, but is in fact what the daily Downing Street press briefings became. This statistical ritual, with its rising death toll, first in hundreds, then in thousands, then in tens of thousands, reinforced initial impressions about the infectiousness and lethality of Covid-19.

When gyms and fitness studios reopened on 25th July, four long months had passed since the Lockdown was introduced. But it’s in the context of the indoor sports sector that we can question popular assumptions about Covid-19 and whether State-induced mortal fear promulgated by Government ministers is justified.

Among the mysteries surrounding Covid-19 – including when it actually arrived in Britain – is how any of the country’s gyms-goers and fitness studio fiends escaped it before the government imposed the Lockdown.

Anyone who was a regular in one of country’s indoor fitness centres before their closure in March can testify that most were hardly operating-theatre sterile, particularly in city centres where space is at a premium. Machines or mats crammed together, shared equipment, crowded changing rooms… Many working out got up close and personal with the heavy breathing and sweat of their fellow fitness fans whether they wanted to or not, in environments which were often strangers to anti-viral wipes. ‘Hot yoga’ fans relished classes in fetid, rammed studios heated to close to 100 degrees.

Covid-19 was supposed to be dangerously infectious, justifying the emergency Coronavirus Act of 25th March which enabled the Police, immigration and public health officials to detain ‘potentially infectious persons’. Civil libertarians across the political spectrum have expressed concerns about the Act: the Institute for Economic Affairs states it imposes ‘greatest restrictions on liberty in modern British history’ while Liberty says it ‘strips away our civil liberties’.

The enforced closure of gyms and studios followed a record-breaking year. The 2019 State of the UK Fitness Industry Report by LeisureDB highlights that total UK membership broke the ten million mark, with one in seven of us now members of a gym, while the number of fitness centres reached an all-time high. The industry was worth more than £5bn a year.

Whether regulars will return to their pre-Covid fitness regimes is the question that must be haunting the industry. With predictions about working from home, is working out at home also going to become the new normal? And just as privately-owned centres might be soon feeling the financial burn, public fitness facilities, many funded by local authorities, are facing an uncertain future: reports last month from fitness trade body ukactive suggested that Britain is ‘sleep walking’ towards losing perhaps half of them’.

Regulars to gyms, as well as yoga and Pilates studios have found them very different places compared with the pre-Lockdown era, with screens around machines such as cross-trainers, fewer students in classes and more cleaning.

Like restaurants and cinemas, gyms can create a safe, socially-distanced environment, but it is not automatic that punters will have the confidence to return to them.

Since March, the government’s Project Coronavirus Fear has been relentless, putting Covid-19 at the Black Death end of the illness scale, bolstered by a media which has delighted in drinking the corona apocalypse Kool-Aid.

But if Covid-19 were lethal and infectious enough to justify a four-month Lockdown that was only supposed to last three weeks, then surely our indoor gyms and fitness studios would have been the places to find high rates of transmission?

Although the numbers dropped throughout the month, one boss of a leading high-end gym chain estimates there were at least 20 million gym visits in March, as peak virus was being reached. Wouldn’t a London-based yoga teacher who was teaching 350 students a week have caught it, along with her colleagues and students? She didn’t; they didn’t: why not?

An earlier version of this article appeared at Conservative Home.