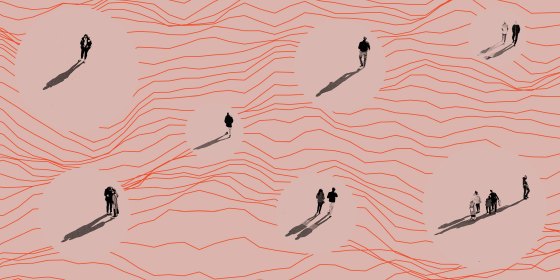 This is an article by Dominey Jenner.

We have all heard rather a lot about ‘the science’ these last few months. Its elevation has been clear through its impact on government policy, with the ever present SAGE and influential scientists such as Neil Ferguson. The consequence has been catastrophic both socially and economically. It would seem that, in fact, science does not have all the answers.

Perhaps it is time to return to a broader understanding of the sciences. Theology was once considered ‘the queen of the sciences’ – the study of God presumed to be the most fundamental way to understand the world that He has made. I would suggest that only through this lens can we really understand why lockdown and its associated policies were always going to be bad for the human experience.

In C.S. Lewis’ ‘The Great Divorce’, Hell is depicted as a socially distanced realm. Its inhabitants move further and further away from each other as time goes on; “they’ve been moving on and on… getting further apart…every now and then they move further still”. Isolation pains us because we are instrinsically relational beings. The Bible holds that we are made in the image of God – a God who by nature is relational. Whilst the Trinity is perhaps one of the most headache-inducing doctrines, it is not hard to understand that One God made of Three Persons is going to involve relationship. Throughout the Bible we see Father, Son and Holy Spirit in perfect and constant relationship with each other. As God’s image-bearers, relationship is what we’re about too.

If being prohibited from seeing your family, your friends and your work colleagues was hard to bear, that is because it went against your human nature. If being required to stand two metres apart from your fellow citizens feels alien, that’s because it is. If you missed just bumping into people at Tesco’s, on the train, or in the park, that’s because we are relational beings. A people required to socially distance are a people required to work against their own nature.

It was early into lockdown that I saw her. An elderly woman, hunched up, face mask pulled up, eyes darting around, aghast at the sight of fellow human being, nothing but fear in her eyes. I wanted to cry.

The fear induced by our government and the media is perhaps one of the most lamentable aspects of this whole Covid episode. The warning given, early on, to the government by a SAGE sub-group that, “the perceived level of personal threat needs to be increased…using hard-hitting emotional messaging” did not go unheeded with government messages such as “if you go out, you can spread it, people will die”, plastered everywhere.

Even now, four months on, YouGov’s fear tracker (yes, it’s a thing) has only fallen by 11 percentage points since its peak, the day after lockdown began. 49% of those most recently surveyed still feel, “very or somewhat scared” of catching the virus. Covid has virtually left these shores and yet the fear remains. The terrorisation of our general population has been wholesale.

“Do not be afraid” is one of the most oft-repeated encouragements in the Bible, expressed over a hundred times. What a sweet counter those words are. They are based on the idea that, whilst not promising an easy life, God is ultimately in control and can be trusted to do the right thing by those who put their trust in Him. With our lives in His hands and Death conquered, we have nothing, ultimately, to fear. Biblically, the opposite of fear is not courage, but rather faith.

Fear is the devil’s currency. He seeks to sow it in human hearts for it is one of the best ways to undermine faith. It is hardly surprising then, that a nation saturated with fear is a nation approximating Hell.

Human beings are the pinnacle of God’s creation. Made on the sixth day, just before God rested, we are created in His image and entrusted with the stewardship of the Earth: “Rule over the fish of the sea and the birds of the air and over every living creature that moves on the ground” (Genesis 1: 28). Human beings are sacrosanct.

Just let that sink in for a moment, because it runs against the grain of so much of current popular thinking. The neo-Malthusian revival, perhaps most apparent in the climate change movement, would have us believe that, in fact, humans are the scourge of the Earth. Consider David Attenborough’s view that, ‘we are a plague on the Earth’. His solution, of course, is population control. I can’t think of anything more contrary to God’s command to Adam and Eve to “fill the Earth and subdue it”.

But what has this to do with face masks? There seems to me to be something fundamentally sacrilegious in the blotting out of half a human being’s face. The face is more than just its physical features – it is part of the essence of a man. Animals have faces but we know it’s not the same.

Whilst I’ll admit to not having a fully developed theology of ‘the face’, I do believe the Bible has something to say about its significance. When Moses asks to see God’s glory, He agrees but says, “you cannot see my face, for no-one may see me and live” (Exodus 33: 20). God’s face is inextricably linked with his Person. So Moses has to settle for God’s back: “I will remove my hand and you will see my back; but my face must not be seen”. Clearly, the face is more than just its constituent parts. When believers are encouraged by the Lord to “seek my face” we know it’s not his literal face but all that the face stands for. The face is symbolic, it expresses the Person. To cover it is, I believe, to dehumanise.

“Ah yes, singing – of course singing will be banned”. This was my first thought when I heard of a church choir in America, that became infected with Covid, following a single rehearsal. It was at this point that my suspicions were confirmed – there was something uniquely wicked about this virus and the way it would be responded to.

Singing is part of what we are made for. Many will be familiar with the opening statement of The Westminster Shorter Catechism; “Man’s chief end is to glorify God, and to enjoy him forever.” Singing is one of the ways by which we are enjoined to do this. “Sing to the Lord” is a regular refrain: “Sing to the Lord, all the earth; proclaim his salvation day after day” (1 Chronicles 16:23).

It is no coincidence that the Bible has a whole songbook, the Psalms, incorporated into it. The apostle Paul encourages believers to “sing and make music from your heart to the Lord” (Ephesians 5:19). Proclamation through the sung word was held dear by the likes of Martin Luther. It is reported that, “many of Luther’s enemies feared his hymns more than the man himself”. We are created to worship and the prohibition of congregational singing denies us this fundamental means of grace.

Furthermore, as if to add insult to injury, there is talk of humming being considered as a substitute for singing. This is like some cruel joke. It is to entirely miss the point of singing. Nothing can be proclaimed with lips firmly closed. I would rather be silent than hum. Imagine John’s revelation of heaven with humming in the place of singing: “Then I heard every creature in heaven and on earth, and all that is in them, humming…” And of course they can’t go on to express what they would have otherwise sung: “To him who sits on the throne and to the Lamb be praise and honour and glory and power, for ever and ever!” (Rev. 5:13). No, we are diminished without the opportunity to sing together.

It has been difficult not to detect a certain malevolence towards children through many aspects of lockdown. Who can forgot the chalked playground squares that French nursery children were confined to? Or pictures of teachers, covered head to toe in PPE, welcoming littles ones back to school by pointing a temperature gun at their heads. Or, more recently, the perverse suggestion from a trusted CBeebies doctor, that children might like to cover their little faces with an old sock. There is so much in the way children have been treated during lockdown that I have found, frankly, dark and sinister.

In the Bible, children are considered to be a gift from God: “Sons are a heritage from the Lord, children a reward from him” (Psalm 127:3). The way we treat children matters. Those who felt license to express their otherwise latent contempt for children, during the censorious atmosphere of lockdown, should have thought twice. Perhaps they were not familiar with Jesus’ strong warning, “if anyone causes one of these little ones those who believe in me to stumble, it would be better for them to have a large millstone hung around their neck and to be drowned in the depths of the sea”.

There is so much more that could be said on this subject: the treatment of our elderly; the decent into madness; our government’s attempt to play God; the idolisation of the NHS; the crippling fear of death. Suffice to say that, from a Christian perspective, these too are great evils.

An elderly preacher who I love and respect once said that the thing that convinced him that Christianity was true was the sense it made of the human condition. You may disagree but it’s at least worth considering. Thanks to our weak national church and the abdication of responsibility by its leaders (with a few notable exceptions), to teach anything approaching biblical Christianity, the majority of people will have no idea why their natural instincts may in fact be correct. It would seem that the queen of sciences has been in exile for far too long.

6 thoughts on “Dominey Jenner: Restoring the Queen of the Sciences”