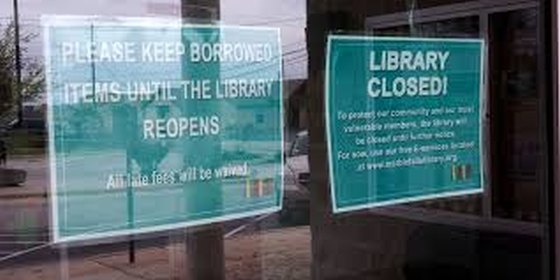 Emma Holland is a married mum of two children living in the North West. She has had enough of lockdown. She tweets at @Emma_Holland_

This morning I tried to use our local, council-run library with my two children (one primary aged, one at high school). Both kids are enthusiastic readers and we are usually frequent users of the library within a short walk from our house. I have in the past felt very lucky to have it there and believe very strongly that libraries are a vital community space and society-leveller. During this lockdown I have spent a second mortgage ordering real books at our independent bookshop, plus purchasing two kindles and a constant stream of eBooks. Not having spent money on a holiday or on activities that are still shut (swimming pool), cancelled (family festival) or apparently ‘full’ (National Trust park) I don’t grumble at spending this money, especially as it can be justified under the family budget heading ‘education’.

Having found out that the library was now open, the kids and I excitedly scoured the house for all the library books that had been read three times over and were now gathering dust. On entering the building, I could immediately see something was amiss, red tape and chairs placed to block areas within the library. I’d imagined things might be different, masks, hand gel, track and trace but what I wasn’t prepared for was that we after depositing the old books taken out in March, we were prohibited from choosing any new ones. Browsing was forbidden! Instead, we were allowed to choose a mystery parcel of no-longer-wanted, withdrawn books. These were organised and labelled by genre, then wrapped and tied with string. Good effort, nicely done, but a major disappointment. The kids chose a pack each although one of these we couldn’t even reach and the librarian had to hand it over to us apologising for having touched the parcel.

I’d clearly missed a vital detail. I thought the building I’d entered was a library. Instead we’d walked into a weird jumble sale. After re-checking the web details on our return, I realised that I should have made both children browse the online library all morning, work out if a book sounds ok, sent an order for a few random books and then collected them in six weeks’ time when they are finally returned, quarantined and then wrapped up during reduced opening hours – or in other words, lose interest completely in the reading process, give up and play Minecraft instead.

Needless to say, the parcels were not a great success. Out of the eight withdrawn-from-stock books, there was one each that they thought they would read and that was appropriate (the Young Adult range is fraught with landmines for the parent of a 12-year-old with a higher reading age.)

What can I do with the other books? The library doesn’t want them. Take them to a charity shop? No! We passed one on the way home. They were open for ‘dropping off goods by appointment only’ but I’m fed up of having to plan my life to that degree… Bonfire? No, that’s a dangerous route, never do that. Paper bin? That makes me sad. Pass them on to a neighbour or friend? Judging by the librarian’s concerns, would they even take them after I’d touched them?

My failed trip to the library has made me consider how many more tax-paid services are still reduced, cancelled, shut. I could do with my money back for some (all!) of them; I have books to buy.

13 thoughts on “Emma Holland: Life in Lockdown – The Library”