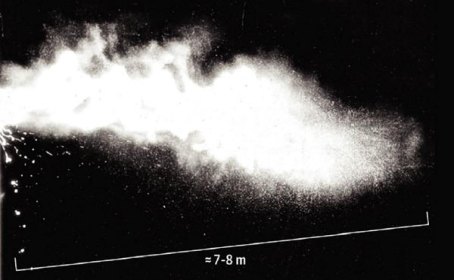 This is an article about an influential BLM-supporting mask fanatic. It is written by Dr No, a medical doctor. It was originally published on Dr No’s own excellent blog, Bad Medicine, which will provide you with much amusement and enlightenment should you to care to venture over there. (If you happen to be a medical doctor it is verging upon required reading.)

So incensed was Dr No on coming across a nonsense paper in the BMJ yesterday that he uncharacteristically dashed off a tweet denouncing the paper as ‘more nonsense from the milk curdler‘. The trouble with Twitter — and the reason Dr No generally avoids it for primary communications — is that a tweet is limited, to 280 characters to be precise, and so almost always bars reasoned argument. If reasoned argument is akin to steady breathing, then a tweet is akin to a multiphase turbulent gas cloud, as sneezes are now known among the cognoscenti. Such esoteric language leaves one wondering whether the humble naked fart is also a multiphase turbulent gas cloud among the cognoscenti — it seems entirely possible, along with the silent but deadly multiphase turbulent gas cloud — but for today’s purposes we shall adopt the Yorkshire way, and call a sneeze a sneeze, for it is the study of sneezes that is the bedrock — or rather quicksand — that underlies the nonsense paper.

Before we get down to detail on sneezes, and the red, amber and green colour-coded ‘guidance’ table so derived, we might look at a few general points about the paper. The first is its authorship and provenance. The milk curdler on Twitter claims it as her own, and boasts that “It’s already got the highest Altmetric score of any paper I’ve ever published“. In fact, the milk curdler is listed as the fifth author of six in total, and is not the corresponding author – so the correct wording is “of any paper I’ve ever co-authored“. We’ll be charitable, and put the error down to over-stimulation caused by the discovery of the highest ever Altmetric score, or perhaps a Twitter slip. In reality, it seems, from a study of the paper’s antecedents and references, that a chief, and perhaps the main, author, at least of the early sections is one Lydia Bourouiba, a professor in fluid dynamics at MIT. Indeed, early parts of the BMJ paper are remarkably similar to a sole-authored Bourouiba paper published in JAMA. In passing, we might also note that of the other four non-professorial authors, two are medical students, and the other two are a ‘clinical researcher’ and a ‘clinical academic’, role, rank and qualifications unspecified.

The other important general point is that the wording of the paper is almost entirely conjectural. It is larded with ‘may this’ and ‘it seems likely that’. This sort of turgid prose is the smoke screen deployed when nothing is actually proved; instead, lots of possibles are conjectured. We can say, entirely truthfully, that Dr No may go to the moon, but that does nothing to prove Dr No has gone to the moon. The paper has exactly the same problem: lots of mays never amount to one jot of proof. The unspoken assumption — relied upon entirely in the traffic light table, which only applies to asymptomatic individuals — that asymptomatic carriers may spread SARS-CoV-2 is especially problematic, given the science on this very moot question remains inconclusive. Asymptomatic carriers may spread SARS-CoV-2, but that does not prove they do spread disease. Or maybe they do, but to a far lesser extent, given that, being asymptomatic, they are not sneezing… We simply don’t know.

For the avoidance of doubt, Dr No’s position remains that while it is may be possible to show the presence of SARS-CoV-2 RNA in snot from asymptomatic carriers, that does not prove asymptomatic carriers are spreaders. They may be (despite not coughing and sneezing), they may be but only to a small (perhaps trivial in the wider scheme of things) extent, or they may not spread at all. We simply don’t know, and it is not an easy question to answer, either by direct experiment (ethical problems), or by observational studies (biases aplenty). 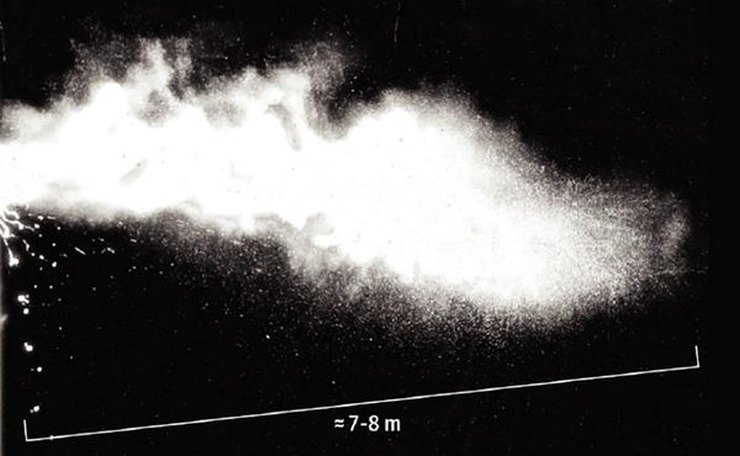 And so to the sneezes. The paper relies heavily on two sneeze images. The first it demolishes as being far too old and fuddy-duddy for modern scientists to tolerate. Instead, it is overtaken by a second truly alarming image of sneeze ejecta — the esoteric term for snot — extending over a striking “7-8 m”. This intriguing image — reproduced, with all but black top and bottom borders cropped, the interests of fair use and comment, as the image to this post — is just presented, as ‘fact’, but a dig around in the various sources and references fails to reveal the methodology employed to take the photo — how, for example, was the sneeze triggered — and the photo itself stands out as the one in which the subject — the sneezer geezer — is never visible. In the other photos, and videos, at least an outline of the subject can be made out, but not in Figure 2. This, along with the absent methodology, severely compromises the integrity of the image, which might, for all we know, be a multiphase turbulent gas cloud exiting the rear end of an elephant.

Adding to the strain on credibility is the immense volume of the cloud. The image shows it to be say 7-8m long, and so by scale about 2m across. Assuming — a not unreasonable assumption, and it’s assumption more than good enough for our purposes — that the cloud is roughly cylindrical is shape, and that the droplets mark the extent of the sneezed air, then with a conservative diameter of one metres and a length of seven metres, then the volume of the cloud is a staggering 5.5 cubic metres. Boy, that is one helluva sneeze coming from a normal human, whose vital capacity (the maximum amount of air that can be exhaled after full inspiration) is likely to be between 3 to 4 litres. This means the sneeze cloud shown in the image is a mind-boggling 1500+ times larger than a normal vital capacity. In the absence of further and better particulars, Dr No suggests that, on the face of it, the image lacks credibility — and might just as well be a multiphase turbulent gas cloud exiting the rear end of an elephant for all we know.

And so finally to the traffic light table, the initial trigger for Dr No’s ire. This bizarre, indeed ludicrous, image has all the hallmarks of being chiefly the product of a fevered mind recently engaged in having a bonfire of imagined straw men. It has more problems than a hydra has heads. The first and foremost is that it assumes — without this assumption it has no place — that asymptomatic and so not coughing and sneezing individuals are significant spreaders of SARS-CoV-2. This, as we have already established, is not a reliable assumption, not even by a long shot.

The second and almost as woeful feature is that it is by it own admission a guide to qualitative relative risk (“The grades are indicative of qualitative relative risk and do not represent a quantitative measure”) which, in the absence of any quantification whatsoever, is entirely meaningless. It is the problem of relative risk — readers of the old Dr No badmed site will know Dr No takes a dim view of relative risk, preferring instead absolute risk — made extraordinary. There is no basis for assigning the colours. We have no conception of what low and high risk mean: one in a hundred, one in a thousand, or one in think a number, such that we have no way of deciding whether these are risks that should bother us. There is no way of knowing what shift in risk is indicated by a shift from green to amber or amber to red, or whether the scale is linear (each change of colour means the same shift in risk) or ordinal (they are just in order, small medium and big, but we no idea what the actual size or intervals are). Nonetheless, apparently a short shouty argument between two mask wearers locked in a poorly ventilated cellar carries the same sort of risk as a silent crowd of unmasked cricket spectators dozing through a sunny summer afternoon.