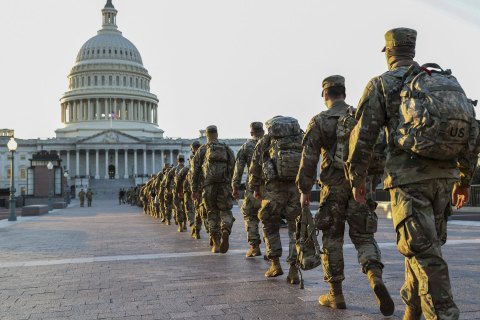 There are certain corners of the internet where a very different narrative is going on about what’s going to happen in Washington this week, most notably at Quodverum. There the likes of Thomas Wictor are absolutely convinced that Trump has something up his sleeve for this coming week. These are not the QAnon numpties, in fact these people loathe QAnon as a bunch of clueless patsies. I have no idea whether they are right. Wictor is a clever and observant man but he is known for seeing all sorts of things that are supposedly going on on the basis of very little, so you’d be rash to put too much faith in him.

On the other hand, though, you do have to wonder whether Trump really does have nothing at all planned for this week. It was obvious months ago that the massive increase in postal voting brought about by lockdowns would be used for election cheating, and many people on the right pointed this out. It was also obvious that the left was absolutely desperate to win this election, because if Trump won, a lot of them would be in serious trouble, so they were going to go to any extent they could to make sure he didn’t. So rigging the election, something the Democrats have been doing for decades in dirty cities, was definitely on the cards, and Trump must have know that. Was he really just going to let that happen?

One problem he would face in trying to do anything about it is that just about every governmental institution that could help him has been taken over by Deep State leftists. Except the military. Well, actually a lot of the military has been taken over. But not all of it. There are sections of it that are still sound and would not want to just watch that criminal gang known as the Democrats cheat their way to power and wreck the country. So the speculation (and it is purely speculation, these guys are not claiming to have insider knowledge or anything like that) is that the military is on side with Trump and that is why there’s been a huge military build-up in Washington this week. Because what the Dems did is going to be exposed and the military is there to stop the leftist thugs and revolutionaries trashing Washington when Trump is inaugurated. That’s the theory anyway. Here’s an article talking about this sort of idea.

It’s probably all wish-fulfillment fantasy, but there are a lot of odd things going on at the moment with the military, and the Democrats are acting very weird and panicky. So it could be a very interesting week.