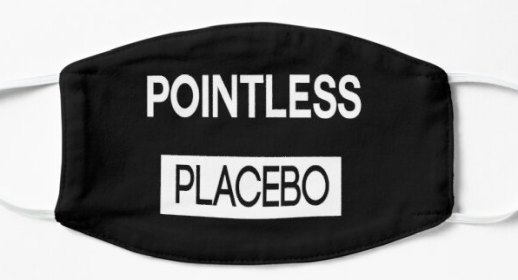 The Face Mask Cult by Hector Drummond will be released in book form soon. Here’s the list of contents, and the introduction.

Part 3: The strange and deplorable case of the Gesundheit-II machine

Part 5: A look at the face mask literature

Appendix A: A short guide to the units of measurement

The scientific establishment told us early in the Covid pandemic that face masks didn’t work. Anthony Fauci, director of the National Institute of Allergy and Infectious Diseases (NIAID) and the Chief Medical Advisor to the US President went on Sixty Minutes and said they didn’t work, and said there’s no reason wear them. Jenny Harries, the Deputy Chief Medical Officer for England, told us not to wear them. None of the pandemic planning that had been done before Covid said we should wear them. The scientific literature didn’t support their use.

Yet over a very short period the scientific and medical establishment, the big health institutions such as the WHO and the CDC, and governments all over the world completely reversed their positions and said that not only should you be wearing masks, they should be compulsory, and laws were brought in to make it illegal not to wear one in public or at work. School children were forced to wear them all day. Millions of school children are still being forced to wear them in 2022. Anyone who doubted the wisdom of this, and thought this was probably yet another Big Mistake from Big Government was treated like a pariah, abused by the media, shouted at in the street, and called a murderer.

Wearing a face mask marked you out as a fellow member of the comforting cult most people were now in. Anyone who didn’t wear one, however, was an outsider, a science-denier, a dangerous maniac who was practically walking around naked in front of children. Those who refused to join the cult and wear the face nappy made the members of the cult feel scared and angry (and a little bit foolish), and were about as welcome as Carl Sagan at an Aztec child-sacrifice ritual.

The anti-maskers were right, though. Nothing much had changed in the science to justify the establishment’s reversal of course on masks. Some fast-tracked research and reviews came out in spring and summer 2020 claiming to show that masks, even cloth masks, worked (or at least would help slow the virus enough to make it disappear), but this research was clearly shoddy, as you will see. The main thing that changed was that the academic establishment, which was full of terrified nerds (who regarded China as a model for the world), started shrieking – often literally, according to stories I heard – that we needed to wear masks. Their allies in the media, civil service and government liked the idea, and decided to change the narrative. The messages went out. Masks were in. Wear one, or else. The science has spoken. Or, at least, the sociologist has screamed.

This book sets out to demonstrate that masks don’t work. Many of the main academic mask–pushers from spring 2020, such as Jeremy Howard and Trish Greenhalgh, who were imploring us to wear a mask, who said that any mask will do, even a scarf wrapped around your mouth, have changed their tune, and now admit that cloth masks are useless. (They want us to switch to respirator masks, like N95s and FFP2s.) But masks continue to be mandated all over the world. There are still millions of workers who have to wear one for their whole shift. Many schools still force their students, even very young ones, to wear them all day. Even in countries like the UK where it is no longer compulsory to wear masks in shops, bars and restaurants, shop assistants and waiters and bar staff are still forced to wear them by their employers. Most airlines are saying that masks will be compulsory to wear on-board, forever, with no exemptions. Hospitals and medical centres still require them, even in areas which don’t have a mask mandate. And many people are still choosing to wear them because they were, and still are, terrified by their governments over a disease whose danger was vastly exaggerated. Mask use is not going away.

Parts 1 and 2 are written in the form of FAQs, where I answer the sorts of questions that often arise in the course of discussions about face masks. Anything you wanted to know about masks is probably in here.

In part 3 I take an in-depth look at various studies that have been conducted with the use of a scientific apparatus called the ‘Gesundheit-II’, centred around a Maryland environmental health scientist named Donald Milton. Conclusions have been drawn from these studies that far outweigh the results.

In part 4 I look at three of the main face mask reviews that have influenced UK government policy: the 2020 DELVE ‘Report on Face Masks for the General Public’, the Royal Society’s ‘Face masks and coverings for the general public’ report from June 2020, and the UK’s Department for Education’s Evidence Summary on face masks from January 2022.

In part 5 I go through the scientific literature on face masks, looking at every randomized-controlled mask trial, as well as many other studies and reviews that examine the effectiveness of cloth, surgical and respirator masks, as well as studies that look at mask harms.

Throw away your mask. Respirator masks can be useful if you’re doing DIY, but if you think they’re going to stop you getting Covid, or stop you infecting people with your Covid, you’ve been sold a pup. If you think masks are the key to stop Covid spreading across the world then you’ve had a mask pulled over your eyes. Just because someone is a government scientist and is on TV doesn’t mean they must be right. It’s time to leave the cult.