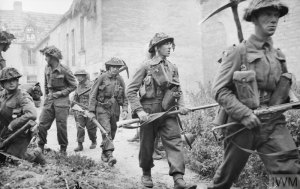 Thanks to the VE Day celebrations, World War II comparisons seem to be common at the moment, with the #StayHomeSaveLives brigades comparing staying at home and watching TV to the men who went to battle against the enemy.

I have been saying for months that saving lives is not all that matters. It matters a lot, but it’s not everything. If saving lives was all that mattered then we would never have gone to war against Germany. We would have saved far more lives by just rolling over and letting them take over the country. Sure we’d have been ruled by the Nazis ever since, but hey, those England and Wales death figures would look so much better than they would have done had we decided to fight Jerry. I mean, they had planes that drop bombs, and guns and tanks and all sorts of shooty and stabby stuff. We’d have lost loads of lives. Seeing as #SaveLives trumps everything, we should have stayed at home and waved at those life-saving Germans from our windows as they rolled into town in their tanks.

You might have had to become a cleaner for the German bigwig who now runs your town, and, okay, your wife might now be in a cockroach-infested lunatic asylum, and sure he might keep your daughters and your friends’ daughters (and some of your sons) in his sex dungeon, but, hey, at least you’re all alive!

No, the point about World War II is that the fighting men risked their lives to battle the Germans and the other Axis powers, knowing that many of them would never come back, in order to preserve our way of life. In order to stop the country being ruled by foreign powers. They threw themselves into the heat of battle, into fields criss-crossed with machine-gun fire, with mortar shells exploding around them, knowing that some of them would cop it, all to defend the freedoms enjoyed by their countrymen. They strapped themselves into flimsy flying tubes with wings to travel all the way to Germany and back again, with anti-aircraft fire all around them, and enemy aircraft intercepting them, knowing that every night fewer aircraft came back than went out, for the express purpose of defending the British way of life.

Defending their culture, their freedoms, their prosperity, their democracy. Their pubs. All those things were worth dying for. It was worth those men risking their lives, at pretty bad odds, for their wives and children and parents and grandparents (and even for other European people), to stop life being worse for them under German rule. So that their children, and future British generations, would not live as slaves, impoverished and beaten-down and miserable and living under martial law. Those things were worse than death.

So don’t any of you #CovidCowards tell me that we need to adopt the World War II spirit to fight Covid-19. Don’t you tell me that staying in your homes and telling people on social media that they’re murderers for going outside is akin to the Blitz spirit. Because those soldiers seriously risked being killed in the most horrific ways, in order to make life better for you. Many of those soldiers gave up their their lives for our freedom and prosperity. They knew that those things mattered, especially for their children and grand-children, so they put their bodies and minds on the line for their futures.

The Covid bed-wetters, however, are putting our hard-won freedom and wealth at serious risk because they are scared of a virus that has at worst a 99.6% survival rate. They are destroying the future for our children because they judge that being exposed to a risk that’s about as bad a World War II soldier faced when he was driven from one training exercise to another is worse than that. They are willing to see the country placed under house arrest indefinitely, which not even the Germans would have brought in to the same extent, just because they think that nothing is worse than one year possibly having a slightly higher death toll than the previous year.

Like those soldiers in World War II, and World War I, I am prepared to risk my life to the same extent to preserve our country and way of life. I am prepared to die to stop my children’s future being wiped out. So take your bullshit World War II analogies and stick them up your arse, #StayHome creeps. You disgust me.